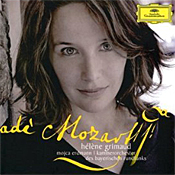 Wolfgang Amadeus Mozart (1756-1791) was a musical prodigy on the piano, a child genius whose father dragged him all over Europe to play before kings and courts. It's no wonder, then, that Mozart would produce some twenty-seven piano concertos during his relatively short life. He seems to have been born to the genre.

French pianist Helene Grimaud, who began playing the piano at the age of seven, also seems to have been born to the instrument. In the few recordings I've heard from her, she appears not only sensitive and virtuosic but more than willing to be herself as well, to reinterpret old favorites with new shadings of her own. Although I've not always agreed with her vision of things, I can certainly appreciate her desire not to be another sheep following every other pianist before her. If there wasn't room for a multitude of interpretations in musical performances, there would be no need for hearing more than one of anything.

Ms. Grimaud begins the program with the Piano Concerto No. 19 in F major, K. 459, where she takes the opening Allegro vivace at its word with a vivacious tempo and characteristically imaginative phrasing. Then she makes the slow center movement all the more lovely for its straightforward simplicity and delicacy, wrapping things up with a snappy finale that seems only fitting.

In the disc's final work, the Piano Concerto No. 23 in A major, K. 488, Ms. Grimaud tends to race through the Allegro, even if the orchestra wants clearly to take their time. Perhaps she wanted to get to the ravishing central Adagio all the more quickly. Certainly, there is no questioning the radiance of her playing here, the tenderness in every note. No doubt, too, her extra-slow pace in the Adagio contributes to a small diminution of lilt and lift; alas, it's all a trade-off, a compromise. In the closing movement Ms. Grimaud is fleet, polished, and technically remarkable, if not quite so much fun as several of her colleagues, particularly Ashkenazy (Decca), Tan (Virgin), Curzon (Decca), Perahia (Sony), and Barenboim (EMI and BR Klassik).

DG recorded the two concertos live at the Prinzregententheater, Munich, May, 2011 and the aria in the Residenz, Herkulessaal, July, 2011. The concertos are miked close enough to reduce most audience noise, but the sonics are still rather soft and a little hollow, with a good number of extraneous sounds from Ms. Grimaud's footwork perhaps or hall resonance, I don't know. It's a distraction in any case and just one of the drawbacks of recording live. Otherwise, the piano is well out in front of the orchestra and fairly well delineated, the orchestral accompaniment smooth though not especially impressive. The vocal pieces, not done live, sound significantly cleaner and more natural, the voice sweet and clear. Not unexpectedly, the two concertos come complete with a disfiguring outburst of applause at the end of each.

Incidentally, there's one oddity about DG's labeling of the album: Neither the booklet cover nor the jewel-box spine mention the music involved. They only name the composer and the artist, Ms. Grimaud. I guess you are supposed to know instinctively (or simply remember) what Ms. Grimaud is playing on the disc once you've set it on your shelf. Or maybe the folks at DG figure people don't really care what Ms. Grimaud is playing, only that she's doing it.