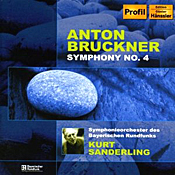 Maestro Kurt Sanderling began his musical career in 1931 and worked steadily in the field, mostly as a conductor, until he announced his retirement in 2002. He was a contemporary of almost every important musician of the twentieth century, he recorded a huge number of works for various labels, and his name is familiar to most classical-music listeners. It's surprising, then, that he was never fully able to break into the highest echelon of musical geniuses. Perhaps this recording of Bruckner's "Romantic" Symphony provides a clue.

While everything about the performance is in place, it never seems to take off, to soar, to inspire the way others do. The Fourth was Bruckner's only program symphony, with the composer telling us what he intended each movement to represent, from knights riding out of a medieval castle at dawn to the sounds of the forest and birds to a hunting song and large-scale summary in closing. More important, the symphony is one of Bruckner's most-beloved works, probably because of its easily communicated grandeur and nobility of spirit. Bruckner was, above all, a profoundly spiritual man, and his music illustrates that spirituality.

Yet Sanderling's interpretation never quite reaches the pinnacles of grand otherworldliness that other conductors of his generation attained in their recordings, people like Otto Klemperer (EMI), Karl Bohm (Decca), and Eugene Jochum (DG). A prominent mid-to-upper bass rise in the sound and a decidedly slow and calculated tempo provide Sanderling's reading with a degree of gravity, but they also tend to darken and deaden the work's tensions. The Scherzo comes off best, yet even here we find more robustness in the other performances I've mentioned.

The Profil label is stingy with their recording details, saying in the booklet insert only that THS Studio restored the sound and citing a date of 1994. I assume 1994 was the recording date, and by the number of coughs and wheezes I heard, maybe it was live. Or maybe the orchestra was having an off day. Anyway, the sound does favor the mid-to-upper bass, as I say, although it isn't enough to mask too much detail. The high end is fine, if not particularly extended, and the midrange is adequate. The stereo spread seems constricted a tad, but it will still fill up your listening room.

Incidentally, of the three comparison discs I listened to, the Klemperer sounds the most transparent. EMI always did take care with their productions.