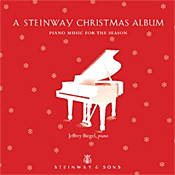 What would Christmas be without Christmas music? And what Christmas could go by without a slew of new Christmas albums? This piano program, A Steinway Christmas Album, from American pianist, composer, arranger, and teacher Jeffrey Biegel is among the most expressive, creative, and delightful of the crop.

A rousing rendition of Leroy Anderson's "Sleigh Ride" opens the show and demonstrates Mr. Biegel's dexterous, virtuosic, festive approach to the music making, giving the old chestnut a sparkling new setting. The next two numbers, by Percy Grainger and J.S. Bach, are in contrast to the first selection, producing more soulful, meditative moods.

In "Quiet Night" we get a novel arrangement of several perennial favorites, "Away in a Manger" and "Silent Night," written especially for Mr. Biegel in a touching and quite fascinating combination. Then we find Mel Torme and Robert Wells's "Christmas Song" ("Chestnuts Roasting on an Open Fire"), a must in any seasonal collection, but this time Biegel does it up more sensitively than we usually hear it.

And so it goes with twenty-one tracks, most of them old standards yet all of them sounding somehow new and different. It's a thoughtful collection that also includes music written or arranged by Tchaikovsky, Liszt, and Reger, plus a number of seasonal classics and a few more-recent ones.

Reger's delicate treatment of "Silent Night" and Biegel's extraordinarily lovely interpretation of it exhibit the kind of musicianship you find throughout the album. The entire program is a joy from beginning to end, and I say that without reservation.

You couldn't really have an impressive album of piano music without a really impressive recording of the piano, and this one satisfies the order. Recorded in 2011 in the Concert Hall of the Performing Arts Center, Purchase College, State University of New York, the piano sound has a realistic body and resonance. While being fairly close up, it nevertheless reflects an appropriate degree of hall ambience, the acoustic producing a most-pleasant overall effect.

To its credit, the music on A Steinway Christmas Album is the kind a person can enjoy all year 'round, not just during the weeks in late December. Jeffrey Biegel is an accomplished concert pianist who presents the tunes as he would any serious classical compositions, with much exuberance, emotion, sensitivity, and good cheer as the case demands. The result is an album for all seasons.