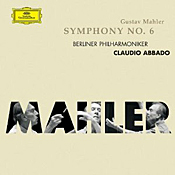 One can hardly fault Abbado's interpretation of the Mahler Sixth Symphony. The man has proved himself a modern master of all things Mahlerian, and this performance has certainly the touch of mastery about it. Above all is the sense of forward drive supreme. From beginning to end, the piece seems of a whole, everything in it rushing toward that final culmination of fate, tragedy, and death.

Abbado adheres to Mahler's final word on the subject, placing the Scherzo in the third rather than the second position as Mahler had originally envisioned it and omitting the third hammer blow at the end (perhaps Mahler was superstitious or maybe he just had an afterthought). The second-movement Andante, the lovely theme he wrote for his wife Alma, comes as a welcome respite after the turmoil of the big first movement, and it's here and in the Finale that Abbado comes off best. The Andante is blissfully serene, the Finale torturously determined. The Scherzo is more iffy, not quite as bizarre as I might have liked it. In fact, if I dare criticize any part of this reading, it's that it may be too much of a piece, too unvarying. I rather like the more diversified (some would say erratic or eccentric) renditions of conductors like Barbirolli, Bernstein, Solti, and Horenstein.

Anyway, you'll get no serious gripes from me about anything but the sonics. Abbado and DG appear to insist upon recording everything they do anymore live, and the results here, although by no means unsatisfactory, are not always flattering, either. The acoustic seems to change from time to time, especially the bass, which sounds a little lightweight. The orchestra also seems more distant than necessary, although with a pleasantly realistic sense of depth; and the highs are at times clear and true while at other times soft and dull. Of course, one can hear the audience doing their usual shuffling and wheezing on occasion, although except for the final applause they are never very disturbing.  (To be fair, however, DG offer the closing applause on a separate track, so if you remember you can always program it out before you start.)

The recording is also available on an SACD in multichannel, and I wonder how much of the CD's odd sonics are due to not hearing the rear channels. I don't know, but the glorious Berlin Philharmonic deserve at least a little better.