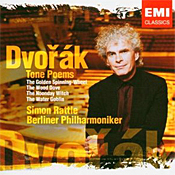 There hasn't been a really good set in quite some time of Dvorak's four tone poems of 1896. The best ones appeared ages ago from Kertesz and the LSO (Decca), Kubelik the Bavarian RSO (DG), and Harnoncout and the Concertgebouw O. (Warner Classics). So it's good to have so refined and polished as set as this one from Sir Simon Rattle and the Berlin Philharmonic from 2005.

The tone poems I'm referring to are The Golden Spinning Wheel, The Wood Dove, The Noonday Witch, and The Water Goblin. Dvorak wrote them toward the end of his career, after he'd made his mark with the nine symphonies and the Cello Concerto and what have you. He wanted to do something uniquely Czech, returning to Prague to compose these orchestral ballads based on folk songs collected by Prague archivist Karel Jaromir Erben. They are typical folk stories, very lurid and grisly as so many folk stories are. They mostly have to do with monsters eating people--young heroines and children--or in the case of The Wood Dove, a bird driving a woman to suicide. Yes, they're rather merciless, but think even of a child's fairy tale like "Hansel and Gretel" and you get the idea. No need for political correctness here nor any apologies.

Rattle and his players handle the pieces in exemplary fashion, with plenty of color and atmosphere. If anything, though, his treatments may be a too sophisticated, too cultured, to capture fully the horrifying aspects of these tales. A quick listen to Kertesz, for example, reveals interpretations less subtle, less delicate, but more boisterous and more robust. This is to take nothing away from Rattle; his just seems to take a more urbane approach to such folky tunes.

The real advantage of the new EMI set is the sound. What a pleasure it is to listen to the Berlin Philharmonic without an audience coughing, wheezing, and shuffling in the background. For most of the tenures of Claudio Abbado and Rattle they and their record companies have insisted upon recording almost everything with the BPO live, perhaps providing more spontaneous performances but compromising the sound. This time out, the orchestra was less distant and a whole lot fuller sounding. By comparison, the old Kertesz-Decca recordings, while still good, are brighter, harder, and more forward, with less mid bass response. The Rattle-EMI recordings are smoother overall, perhaps a touch too soft, and much better balanced tonally, with a sturdy if sometimes overly prominent mid bass.

The only serious complaint I would make is that the two discs in the Rattle set contain a total of about eighty-three minutes of music: forty-eight minutes on disc one and about thirty-five minutes on disc two. It is short measure, hardly more than one finds on a single disc these days.  Oh, well....