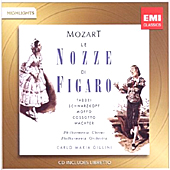 If, for some completely unknown reason, you have never bought Maestro Carlo Maria Giulini's complete performance of Mozart's Marriage of Figaro with Taddei, Schwarzkopf, et al, the folks at EMI give you a chance to sample the performance on a single-disc highlights album. At a reasonably low price, EMI make the CD attractive to curious listeners.

The 1959 recording has everything going for it, so it's no wonder it became an instant classic. It's got a dream cast and conductor (Giuseppe Taddei, Elisabeth Schwarzkopf, Anna Moffo, Fiorenza Cossotto, Eberhard Wachter, and conductor Carlo Maria Giulini), a great orchestra in its prime (the Philharmonia), the legendary Walter Legge as producer, and the capable Douglas Larter as balance engineer.

The highlights comprise fourteen selections that take us from the beginning of the opera (the overture) to the end, with three or four selections from each of the four acts. The disc timing totals about sixty-two minutes in all, from the complete opera's two-and-a-half hours.

It is one of the few Figaros I have listened to over and over again on LP and CD, thanks not only to the set's superb singing but to Giulini's elegant, urbane, yet wholly engaging approach to the score. No, it's not the most lighthearted or rollicking interpretation; we wouldn't expect that of Giulini. Instead, it's more of a polished, refined reading, yet still spirited and fun. I find it the most refreshing kind of performance for repeat listening.

Taddai seems a touch too basso grave for the role, perhaps, but the ear and mind adjust. Moffo is sprightly and appealing. And Schwarzkopf is simply, well, Schwarzkopf, in her day a reigning queen of the opera stage.

If I have any misgivings about this issue, it's that EMI used the same transfer for it that they made in 1989. Although I was hoping for one of the company's newer ART-technology remasterings, it still sounds good for its age. Or for any age. The sonics are a tad thin, perhaps, but dynamic and realistic. There's a good sense of stage depth as well, and a wide stereo spread. Played loudly, there is the faintest hint of background noise, so play it at a reasonable level.

As we might expect, we also get an informational booklet with a synopsis of each scene; but the full text and translations of the libretto are also on the disc in the form of a PDF file. You'll need a computer with a CD-ROM drive and Adobe Acrobat 6.0 or higher to access and print it out.

For listeners who are not up to listening to the complete opera or for those who just want to test the waters before possibly buying the complete set, this single-disc highlights program seems well worth investigating.