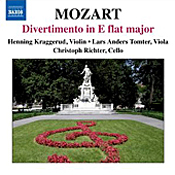 My Random House Unabridged Dictionary defines a divertimento as "an instrumental composition in several movements, light and diverting in character, similar to a serenade. Also called a divertissement." My Harvard Concise Dictionary of Music goes on to say it "applied in the second half of the 18th century, especially in Austria, to an enormous variety of nonorchestral, instrumental works. These include lighter types, such as the cassation, serenade, and notturno, as well as more serious types of chamber music, such as the string quartet." Or, in the case of the String Trio in E flat major, K. 563, by Wolfgang Mozart (1756-1791), well, a trio.

Interestingly, it was the only string trio Mozart would complete, writing it in 1788, the same year he finished his last three symphonies and only a few years before his death. So, it's one of the composer's very late and, thus, most mature works. Indeed, some critics consider the six-movement piece among his best compositions. Here, the Norwegian violinist Henning Kraggerud and Norwegian violist Lars Anders Tomter (both playing on period instruments) join German cellist Christoph Richter to produce a worthy addition to a small but growing list of fine recordings of the work.

The three performers Naxos assembled on the disc play with distinction, as we might expect, and provide a pretty good rendition of Mozart's music, their tempos neither too fast nor too slow but about right for a traditional reading of the score. The Trio begins with an Allegro, played with spirit and bite. The performers take the principal theme, one of Mozart's typically beautiful melodies, at a pleasingly moderate gait that makes it melt in the air. Then, because they do not play the opening movement excessively fast, the lovely Adagio that follows is not so jarring a contrast as it might be but flows naturally from everything that went before. The players handle it lightly and poetically.

After the Adagio we get the first of two minuets, a fairly energetic affair with a folklike character. In the center of things we find an Andante consisting of a series of variations, the players doing an adequate job distinguishing among them. Next, we're back to a minuet, only this time it is more stately and elegant, yet delightfully played, with appropriate grace and panache. The Rondo: Allegro that ends the work continues the cheerful temper of the previous segment, again flowing lyrically and heartily along.

Kraggerud, Tomter, and Richter provide a charming reading of the piece all the way around, one that compares favorably to a couple of my own favorites in the work: Grumiaux, Janzer, and Szabo on a Philips Duo set and Kremer, Ma, and Kashkashian on a Sony disc. The "however" is that if you already own one or both of the older recordings, I wouldn't consider the newcomer any better, and, indeed, the older recordings may actually possess a degree more authority and conviction. Still, it's all a value judgment, and if you don't already own the music, any of the releases make respectable choices.

As a brief fill-up, Naxos also provide the String Trio in G major, K. 562e, a single-movement fragment that Mozart wrote shortly before K. 563 and maybe a stepping stone to the better piece.  Why he never finished K. 562e is anybody's guess. Nevertheless, it exhibits in its few minutes duration the kind of musical moods to come, a Trio in miniature.

One can hardly fault the sound. Recorded in Lindemannsalen, Musikkhogskole Oslo, Norway, in 2008, it's big and bold, or as big and bold as a recording of three performers can be. Miked at fairly close range, it spreads the three instruments across the sound stage and captures each of them vividly, yet without brightness or harshness. They sound quite natural, in fact, with just a touch of hall bloom to smooth out the response. In addition, we get a good dynamic response from the players, with more than adequate transient response. While there may not be quite the sense of intimacy from the performers at so close range, making them appear perhaps a little larger than if they were in a hall and we were listening to them, it's a trifling complaint in an otherwise fine recording.