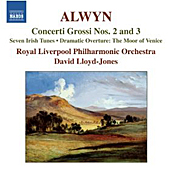 To understand the nature of the music on this disc, it helps to know that British composer, conductor, and music teacher William Alwyn (1905-1985) spent most of his career writing film music. You may have heard some of it without even realizing it in movies like Odd Man Out, The History of Mr. Polly, The Winslow Boy, The Rocking Horse Winner, The Crimson Pirate, Malta Story, Wee Geordie, A Night to Remember, The Professionals, Swiss Family Robinson, and In Search of the Castaways. I mention this because Alwyn's cinematic style tends to seep over into his orchestral concert work, with everything seeming to come out in bits and pieces, nothing lasting too long, as though he were scoring a movie with thematic musical cues. It's not a bad approach, just different.

The program opens with the dramatic overture The Moor of Venice, written in 1956, a musical treatment of Shakespeare's Othello. Dramatic it is, with David Lloyd-Jones and the Royal Liverpool Philharmonic going for the tragedy above all. I have to admit I didn't find it particularly engrossing, but it is certainly boisterous; and it's one of three works on the disc that finds a world-première recording.

Then, we get the Concerto Grosso No. 2 from 1948. Alwyn scored it for string orchestra, so it sounds a bit smaller and airier than the other works on the disc. It's a vigorous, active piece, with much high energy and good spirits to recommend it. In three movements, it starts with a delightful Allegro of contrasting moods, reminiscent of Bernard Herrmann's music; followed by a tranquil Adagio with a particularly lilting, pastoral melody at its core; and concluding with a spirited finale in which Lloyd-Jones appears to find great delight.

Next, we get another world-première recording, this one of the short, four-movement Serenade from 1932. It starts out quietly but soon develops a series of differing tempers, from a Bacchanal to an Air, finishing up with a kind of Highland march. Although I can't say there's a lot of continuity among the various sections, they are fun, at least as Lloyd-Jones and company offer them up.

Seven very brief Irish Tunes come next, a suite for small orchestra that Alwyn wrote around 1936. They are happy little ditties, of minor consequence yet pleasant-enough to hear. They sound as though they should accompany a film set in Ireland, something like The Quiet Man. Again, it's a world-première recording.

The program ends with the Concerto Grosso No. 3 from 1964. It's more serious than No. 2, Alwyn writing it as a commission to celebrate the twentieth anniversary of the death of conductor Sir Henry Wood, which may explain some of the work's gravity. While Lloyd-Jones does his best to bring the music to life, the whole thing is so dark and solemn, it's a hard sell.

Recorded at Liverpool Philharmonic Hall in 2007 and 2010, the sound is quite attractive, very open and clear. The recording provides a modest orchestral depth and wide stereo spread, the strings exceptionally smooth without ever being soft or recessed. The dynamic range is merely adequate, not too terribly wide, as are the bass and treble extension. Nevertheless, this is music that doesn't generally require much in the way dynamics and bass, so it probably doesn't matter as much as the transparency of the midrange, which is what stands out here.

Email ThisBlogThis!Share to TwitterShare to FacebookShare to Pinterest
Labels: Alwyn