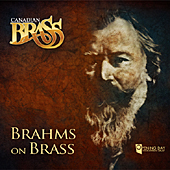 I'm only guessing here, but I doubt that trumpets, trombones, and horns would be the first instruments that come to most people's mind when thinking about waltzes, particularly Brahms's very Germanic waltzes. I mean, where's the typically lilting grace of a waltz in all-brass instruments? Yet Canadian Brass, one of the world's premiere brass ensembles, manages to pull it off well enough, as they do almost everything they tackle.

The program begins with Brahm's Sixteen Waltzes, Op. 39, originally written in 1865 for piano, four hands, and here adapted for brass quintet by Brandon Ridenour and Chris Coletti. They are concert waltzes at about a minute or so each, so it's not exactly as though anyone were going to try to dance to them. The Canadian Brass play them with a wonderfully refined élan, each piece melodic and rhapsodic. The brass quintet, as expected, sounds fuller than any piano accounts, almost as though being played by an entire body of strings, which may or may not appeal to everyone. The tunes alternate between slow and bouncy, always charming, folksy, swirling, and exciting.

The centerpiece of the album is the Ballade in D minor, Op. 16, No. 1, the first of four ballades for piano Brahms wrote in 1854, and here adapted for brass octet and timpani by Brandon Ridenour. It makes a serious statement and stands in dramatic contrast to the lighter waltzes that open the show. Brahms intended for the Ballade to evoke the mood of a mythological Gaelic tale, which I'm not entirely sure I heard in it. However, it is fun, and the dark tones conveyed by the brass instruments go a long way toward creating a medieval atmosphere.

The disc concludes with Eleven Chorale Preludes, Op. 122, written in 1896 and published posthumously several years later, here adapted for brass quintet by Ralph Sauer. They come off best, in part because they are the most-mature works on the disc, and the Canadian Brass give them due respect. Originally, Brahms intended them for organ, and one can easily imagine the organ in the brass ensemble, supplemented by the additional instruments, the team providing a rich tapestry of sound.

Speaking of sound, Opening Day Entertainment recorded the album in 2010 at Christ Church, Deer Park, Toronto, Canada, the sonics coming up both warm and mellow on the one hand and clean and transparent on the other. Or as transparent as a group of brass instruments (trumpets, horns, trombones, and tuba) can sound. In other words, we get pretty good clarity without sacrificing easy listening to any brightness or harshness. There is also an ample stereo spread involved and a good sense of instrumental depth.

Finally, a word about the packaging. The single disc comes housed in a Digipak container that folds out to four sections, something like a road map and about as much fun to get back together as refolding a road map. There is no booklet insert, the notes and contents written on the foldout portions of the package. It's a bit clumsy, and I don't really care for the idea of a Digipak, anyway. If you break the center spindle, you can't just buy another jewel box for the disc. It's a minor qualm about an otherwise excellent release.