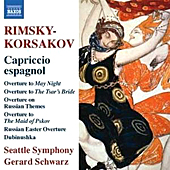 Quick: Name the first piece of music that comes to mind when you think of Russian composer Nikolai Rimsky-Korsakov (1844-1908). Yeah, me too. Scheherazade. But how about your second thought? Maybe the Capriccio espagnol? Well, since Maestro Gerard Schwarz and his Seattle Symphony already gave us Scheherazade, this present album is a follow-up to it. So, if you have the earlier disc and liked it, you'll no doubt like this one, too.

Capriccio espagnol is the Russian composer's tribute to Spain, and isn't it interesting that several of the most-popular pieces of Spanish music came to us via non-Spanish composers like Rimsky-Korsakov, Bizet, and Chabrier? Perhaps it says something about the nature of Spain, its people, and its music that so many composers from other lands have wanted to try their hand at capturing the Spanish spirit. In any case, Rimsky-Korsakov did so with great success, and his five-movement Capriccio espagnol has been a staple of the basic classical repertoire since he wrote it in 1887.

Schwarz's realization of the score is quite vigorous and colorful, as it should be. He handles the sinuous slower sections well, too, like the Variazioni, which demonstrate plenty of heart and feeling. As for Spanish flavor, Schwarz lets the composer take care of that. I particularly enjoyed the harp passage in Scena e canto gitano ("Scene and Gypsy song") and, of course, the violin work throughout, which I assume to be that of concertmaster Maria Larionoff.

The rest of the program comprises a series of additional short pieces by Rimsky-Korsakov, mostly overtures but also including Dubinushka ("Little oak stick"), a catchy little song he orchestrated in 1905 and reflective of student unrest at the time. Schwarz handles each of the chores with a consummate skill derived from a lifetime of pouring his soul into music. Certainly, one cannot fault his enthusiasm, his continued forward pulse, and the precise execution of the Seattle Symphony.

The Tsar's Bride probably displays the greatest degree of Russian flair, with The Maid of Pskov not far behind. The program ends with the Russian Easter Overture, 1886, maybe as famous as the Capriccio. The composer used liturgical themes throughout Russian Easter, which annoyed Tsar Alexander III so much he never wanted to hear it again. More's the pity for him. The piece builds to a wonderfully joyous conclusion in which Schwarz seems to take great relish.

The sound, recorded in Benaroya Hall, Seattle, Washington, in 2010 and 2011, appears slightly constricted, perhaps dynamically limited a tad. While it's not extreme, things don't always seem to open up as they should, with a small amount of veiling over the midrange as well and not the very best extension of bass or treble. In order to get the most out of the sound, you have to turn it up somewhat loudly, and then it gets a touch rough. Still, played at a moderate level, the sound is smooth enough and easily listenable.