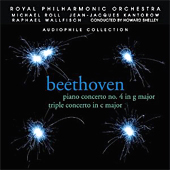 Of the several Royal Philharmonic re-releases I've heard from the Allegro Corporation, this one with pianist Michael Roll and conductor Howard Shelley seems to me the best of all. It offers some of the most well-rounded interpretations of Beethoven I've heard, some splendid sound, and a coupling, the Fourth Piano Concerto with the Triple Concerto, I've not found elsewhere. It makes a good package.

The album begins with the Piano Concerto No. 4 in G Major, Op. 58, which Beethoven wrote in 1805-06, around the same time he wrote the Fourth Symphony and parts of the Fifth Symphony. The tempos the performers choose are neither lax nor rushed but just right in a traditional sort of way. Expect no surprises here, no period-instruments practices, just good, old-fashioned music making. Pianist Roll, too, is on his game, combining a virtuosic style with a light, lyrical touch, making this Fourth Concerto a sweetly gentle affair, despite the more-rambunctious parts.

With Roll and Shelley the first movement perhaps misses a little something in terms of ultimate dramatic effect, making up for it with a balmy, mysterious air. Frankly, I find the length of the first movement difficult for any soloist to sustain; nevertheless, Roll holds his own throughout.

The slow movement Andante, scored for piano and strings only, comes off even better, with not even a minor reservation from me. Roll's remarkably poetic manner makes the perfect foil for Beethoven's slightly agitated orchestral accompaniment. Then, we get the big finale--passionate, tempestuous, rhythmic, stormy, graceful, you name it, Beethoven goes for broke, and Roll and Shelly keep up nicely.

Along with the Fourth Concerto we get the Triple Concerto in C Major, Op. 56, dating from around 1804, making an obvious historical connection with the Fourth. Attended by such distinguished artists as violinist Jean-Jacques Kantorow and cellist Raphael Wallfisch, the RPO, Roll, and Shelley make a formidable team. Their reading of the Triple Concerto is refined and exciting, beautiful and energetic. Combining power, charm, and authority, it's an ideal companion piece on the disc.

Because Royal Philharmonic Masterworks and the Allegro Corporation, who have re-released this disc, seem reluctant to disclose any recording dates on their packaging, I had to do some Googling to discover that Tring originally issued the disc in 1997 as a part of their "Royal Philharmonic Collection." What the new release does tell us, however, is that it is a "20 bit digital recording, edited and mastered via 32 bit digital sound processing, recorded in high definition and playable on all CD players."

Anyway, the sound is weighty and warm. It's also moderately close-up, yet not so close that we don't hear at least a modicum of stage depth. Although the piano seems a little too forward in the Fourth Concerto for my liking, it produces a reasonably clear, clean tone. In addition, the dynamic impact could be stronger and the midrange a touch more transparent; however, on the whole the sonics are natural and realistic and highly listenable.

While I like almost everything about this release, I can't say I'm too fond of the cover art. Like their other RPM booklet covers, this one is in black, making the titles hard to read. What's more, it features four white blotches that appear either to be a fireworks display or bullet holes in a windshield. I much prefer cover art I can easily read as well as look at and enjoy.