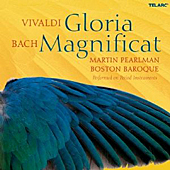 The most striking thing one notices almost immediately about this Telarc release is the clean transparency of the vocals. Voices are notoriously hard to record, particularly massed voices in choral presentations, which often sound either too bright and forward or too recessed and dull. Here the voices don't approach either extreme. The choir seems perfectly natural and remarkably clear, one of the best recordings of its kind I've heard. If I have any reservation about the sonics, it's that the choir as pictured in the booklet insert is standing on an elevated stage some ten feet behind the orchestra, whereas in the recording the singers appear to occupy the same space as their accompaniment. In other words, the recording could have used a tad more depth.

Martin Pearlman's Boston Baroque ensemble, about two dozen or so strong, play on period instruments, but they never sound harsh or strident, and their tempos do not plunge headstrong into the realms of the frenetic. Like the chorus they attend, the instruments sound perfectly realistic, and the players perform both works on the disc with grace and decorum.

Although the interpretations are not entirely what we think of in terms of period readings, they retain an energy and vigor that one often associates with such performance practices, Vivaldi's Gloria, especially, moving forward with a delicate gusto.

For the disc's companion piece, Pearlman chooses to play Bach's revised Magnificat in D-major rather than the earlier one in E-flat. Many other period conductors prefer the original as somehow being more authentic, but it was Bach himself who revised the piece about ten years after its première, supposedly in order to remove some Christmas hymns that tended to limit its value year round and to lower the key to make it more comfortable for several of the instruments. In any case, it, too, comes off as well as any Magnificat I've heard, thanks to the refined liveliness of the performers. An excellent issue.