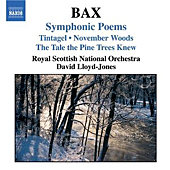 Conductor David Lloyd-Jones and the Royal Scottish National Orchestra recorded English composer Arnold Bax's complete symphony cycle for Naxos between 1995 and 2003, with each symphony accompanied by one of the composer's tone poems per disc. A little later, the enterprising Naxos folks did a welcome double dipping by releasing five of the tone poems on their own CD, reviewed here.

Lloyd-Jones does well by these symphonic sketches, although none of them match my favorites, recorded by Sir Adrian Boult for the Lyrita label back in 1968. Still, Lloyd-Jones has the measure of the music. The disc begins with Tintagel, Bax's depiction of the rocky precipice on the Cornish coast reputed to be the birthplace of the legendary King Arthur. Like the actual location, the short, symphonic tone picture is all about rugged seascapes, craggy cliffs, and splashes of ocean spray. David Lloyd-Jones serves the music well, although his interpretation is a tad on the light, leisurely side compared to the more rough-and-tumble vigor displayed in the work of conductors Bryden Thomson (Chandos) and the aforementioned Boult.

Bax based The Garden of Fand on Irish legend, the music describing a picture of a calm sea over which sails a small ship, eventually tossed onto Fand's island, where the gods play with the lives of mortals. I thought it came off the best of all Lloyd-Jones's readings, where he expresses the strong but quiet emotions of the tale vividly and strikingly. Following this, we find The Happy Forest, a short piece adhering to Bax's pastoral pattern. Bax described it as a nature poem, and, in fact, basing it loosely on a poem; but it is mainly impressionistic, not programmatic, and Lloyd-Jones sensibly maintains a tight rein on any possible histrionics.

The next-to-last poem is a sixteen-minute composition with the inconvenient title The Tale the Pine-Trees Knew. I say "inconvenient" because it tends to make the piece seem like a children's story, which it most pointedly is not. Bax fills it with strong rhythms, rugged harmonies, and moody reflections, all done up sympathetically by Lloyd-Jones, whose Scottish forces must have this music in their blood. And the final work is November Woods, one of the best things Bax ever wrote (along with Tintagel). November Woods is evocative of a Buckinghamshire wood on a proverbial dark and stormy night. Although again Boult portrays the scene more picturesquely, Lloyd-Jones is almost equally atmospheric.

Oddly, I thought the Naxos sound was best in the earlier recordings, the 1995-96 productions of November Woods and The Tale the Pine-Trees Knew. By the time Lloyd-Jones recorded Tintagel in 2002, the sound appears to have become softer in the midrange and more billowy in the mid-bass. Nevertheless, given the fact that Boult's collection on Lyrita is sometimes hard to find (it seems to keep appearing and disappearing in the catalogue), and that Naxos price the disc absurdly low, I can't think of a reason in the world why the interested listener shouldn't try it.