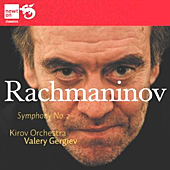 When Sergei Rachmaninov (1873-1943) premiered his Symphony No. 2 in E minor, Op. 27, in 1908, he probably had no idea that his ultraromantic creation would someday compete in the basic classical repertoire with anything his predecessor, Peter Tchaikovsky, had written. He just wanted to write a piece of music that would at least equal the success of his own Second Piano Concerto. Today, you'll find a plethora of Rachmaninov Second Symphony recordings in the catalogue, so given the work's popularity, there is no question why Newton Classics decided to re-release this one in 2011, a recording originally made by Valery Gergiev and the Kirov Orchestra for Philips in 1993. Although Gergiev's rendition may not top the charts, it is a safe and sane approach to the score.

The opening Largo is big and lush, with Gergiev adding nothing of his own, which in this case might have been a little too unflattering. Previn (EMI), Pletnev (DG), Ormandy (Sony), Ashkenazy (Decca), and others put more of themselves into the music, making it a tad more affecting. Naturally, there are critics who believe that Rachmaninov's music is already too florid, too ornate, too overly romantic, and needs no further amping up by a conductor, a claim with which I wholly agree. However, there is still some need of an interpretation involved; otherwise, a machine, a metronome, could conduct the music. Not that Gergiev is a machine, but by observing the exposition repeat and adopting a leisurely pace, it makes the first movement one of the longest I've heard. I would have preferred a bigger, more sweeping, more dynamic approach, but maybe that's just me. Certainly, this is a most-lyrical reading, if a little plain.

In the rest of the symphony, Gergiev picks up the tempo. The Scherzo has plenty of zip, although it, too, seems a little undernourished in terms of pure intensity. The conductor appears determined to connect everything, even at the expense of losing some energy in the process. When he does speed things up, it seems almost an afterthought and stands in stark contrast with everything that went before, not always making for a smooth continuity. Despite this, the conductor produces more than a few moments of requisite excitement.

Next comes the famous Adagio, which in terms of its love interest vies with Tchaikovsky's Romeo and Juliet Fantasy Overture for sheer passionate fervor. Gergiev and his solo clarinet player take it to appropriately poetic heights, the rich Philips sound pouring around our ears like melted butter.

When it comes to Rachmaninov's finale to the symphony, it should be both highly Romantic and triumphantly heroic, and Gergiev gives it his best shot. He closes the show in a blaze of triumph that maybe doesn't dismiss one's admiration for the aforementioned conductors but at least gains one's respect. While Gergiev is certainly more low-key than many of his rivals, he maintains his vision for the music throughout the four movements and never lets go. And, admittedly, it is a levelheaded vision.

Philips recorded the music at the Marinsky Theater, St. Petersburg, in 1993. Like most of the little jewels that came from Philips, it sounds spacious, slightly warm, and a touch soft, with a modest stage depth and a lovely ambient bloom. The sound nicely complements the music and Gergiev's interpretation of it, the natural orchestral glow further romanticizing Rachmaninov's rapturous melodies without sacrificing too much detail or definition.