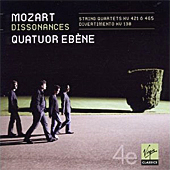 My Random House Unabridged Dictionary defines "dissonance" as "a simultaneous combination of tones conventionally accepted as being in a state of unrest and needing completion; an unresolved, discordant chord or interval." We don't usually associate such dissonance with the music of Austrian composer Wolfgang Amadeus Mozart (1756-91), the widespread use of dissonance not coming into general musical prominence until the twentieth century. Yet here it is: Mozart's String Quartet No. 19 in C major, KV 465, nicknamed "Dissonance." And that's not all; as the ensemble Quatuor Ebene demonstrate with the other two compositions on the disc, Mozart seemed fond of this particular form of development and resolution.

The program opens with the String Quartet in D minor, KV 421, from 1783. Quatuor Ebene say that in order to interpret Mozart well, performers must have "absolute technical assurance" and the ability "to let go and bare all." These four young French musicians (Pierre Colombet, violin; Gabriel Le Magadure, violin; Mathieu Herzog, viola; Raphael Merlin, cello) appear to have mastered both areas. The KV 421 quartet displays a purity of line and a clarity of purpose that is hard to deny. The overall tone is a little darker, more somber, than most of Mozart's work, yet it's always gripping, especially in the hands of Quatuor Ebene.

Next, we get the Divertimento in F major, KV 138, a quartet Mozart wrote in 1772 and a distinct contrast to the pieces that bookend it. Generally bright and joyful, with a nostalgic central Andante, the work keeps the dissonance to a minimum, although it is in evidence even in so early a work.

Then we find the String Quartet in C major, KV 465, which got its "Dissonance" moniker largely from the solemn introduction of the opening Adagio. Its harmonic ambivalence soon dissolves, however, into a more-radiant spirit. Quatuor Ebene handle the transitions among the four movements smoothly, and they present the music's varying moods with a calm self-confidence and a radiant good cheer. My comparison here was a Teldec recording I had on hand by the Alban Berg Quartet, which seemed marginally more animated to me than that of Quartuor Ebene. Nevertheless, Quartuor Ebene constitute a fine group of performers who exhibit plenty of virtuosity, dash, charm, precision, and poise.

Virgin recorded the quartets at Ferme de Villefavard en Limousin, France, in 2011. The instruments appear fairly close up, making for a wide stereo spread, yet with a pleasant ambient glow around the notes. So, it's not as much an ultra-clear, clinical sound as it is a reasonably natural, well-articulated, if somewhat spacious one. Although I would liked to have heard a tad more distance involved, I have no serious complaints on this front since the sonics so well serve to illuminate the music.