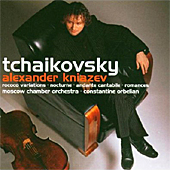 Aside from the fact that this is a fairly somber affair, something that comes with the territory when you're listening to cello music, the performances and sound are almost letter perfect.

Russian cellist Alexander Kniazev plays Tchaikovsky's justly celebrated Rococo Variations with passion and intensity, just as he instills a decidedly romantic pathos into the other Tchaikovsky pieces: the Nocturne in D minor, the Andante cantable in d major, and ten of the songs, called Romances, arranged for cello and orchestra by Evgeni Stetsuk.

The cello is, as they say, made for lost love, and in all of these works Kniazev conveys a mournful melancholy. A little of it goes a long way, to be sure, but in small doses it is quite enchanting, and we get interpretations for the Romantic in all of us.

The recording itself works well for the intimacy of the music, and it opens up a good deal of inner detail that any more-distant miking might have obscured. (It also opens up the cellist's occasional groans and wheezes, but that's another story.) The Moscow Chamber Orchestra sounds reasonably clear, with decent width, depth, and bloom. It's a pleasant-sounding recording.

If I have any negative criticism at all, it's about Warner's packaging. The back cover of the jewel box lists the disc's contents but not in sequence. Which means if you want to play anything in particular on the disc and want to know the track numbers, you have to go into the booklet to find it. And I do mean "into" the booklet, because Warners do not list the disc contents sequentially on the back of the insert, either, only inside. Then there's the cover photo of Mr. Kniazev, dressed entirely in black, hair askew, stubble on face, sprawled on a black leather chair next to his instrument, and scowling. I suppose the disc's art director intended Kniazev's expression to mirror the mood of the music, but he doesn't appear so much melancholy or unhappy as he does angry. I may be one of the few people in the world who enjoys looking at a cover picture while listening to the music, so give me a pastoral painting any day.