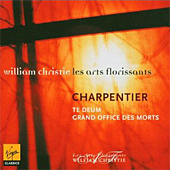 If the opening "Marche de timbales" in Charpentier's Te Deum doesn't set your blood to racing, you probably don't have a heart big enough to appreciate the music. If that sounds like a typically snobby statement from a classical-music critic, so be it. But, really, I'm neither a snob nor a music expert; I just love those drums! I mean, they sound great, all the more so from a live recording. If you've been following this site for long, you know I don't usually like live recordings. So this is an exception.

Incidentally, speaking of good sound, do people still show off their audio systems the way they used to? Or does everyone nowadays deal only in home theaters and DTS-HD Master Audio 7.1 this and Dolby TrueHD 7.1 that, with 800-foot 3-D projector screens between their main, front speakers? I dunno. But, as I say, this Charpentier disc is one of the few live recordings I've really enjoyed.

French Baroque composer Marc-Antoine Charpentier (1643-1704) wrote his Te Deum in D major, H. 146, somewhere in the late seventeenth century, the date is uncertain, for soloists, choir, and orchestral accompaniment. Since the opening section has a distinctly martial tone, he probably wrote it to commemorate a military victory, something folks today might consider a bit odd in what is primarily a sacred piece of music. Yet when you consider the relationship between religion and war over the years (especially as recounted in the Old Testament), maybe it isn't so unusual.

In any case, Charpentier's grand, elegant music could not find itself in better hands than those of William Christie and his Les Arts Florissants ensemble, as refined and polished a group of performers as exist anywhere in the musical world. The funny thing is, though, that as elegant as Christie and his performer are, they produce an unrestrained rendition of the music, full of Technicolor excitement. The choral singing is flawless; the instrumental playing is impeccable; and Virgin's engineers capture the results in the smoothest live sound one could imagine.

OK, granted not everyone appreciates a good Mass, a good celebration of and praise to God, and that's what this music is all about. But since most of us can't understand Latin, anyhow, it probably doesn't matter what they're singing. Just enjoy the voices and the instruments, which blend together almost preternaturally. And what a lovely ambient glow there is in the hall, without a trace of ringing or dulling, remarkable, as I say, considering the live recording.

In addition, the disc includes the Grand Office des Morts, a compilation of three pieces that Charpentier probably never meant as a whole. Yet it works wonderfully well. The package comes with good, concise booklet notes, too, with song texts in Latin, French, English, and German.

Email ThisBlogThis!Share to TwitterShare to FacebookShare to Pinterest
Labels: Charpentier