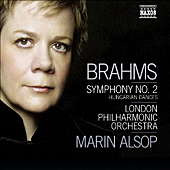 You know it must be an important disc when a low-cost label such as Naxos provides the jewel box with its own slipcover. You also know something's up when you get half a dozen press releases on the subject. Thus, it was with raised expectations that I sat down to listen to conductor Marin Alsop's rendering of Brahms's Symphony No. 2.

I'm not sure I should have gotten my hopes up quite so high because the performance turns out to be strongly Romantic but not spectacular. While I have never been an avid Brahmsian, I have always rather enjoyed his Symphony No. 2 in D, Op. 73, with its pastoral moods and generally cheerful outlook. It provides a pleasant contrast to the darker, grander tones of the First Symphony. Not that the Second Symphony is all sweetness and light, as it does have its momentary elements of gloom, but it mostly begins and ends on a light, lyrical note, which Alsop conveys nicely in her interpretation.

Indeed, Alsop's reading is a very tight, cozy, safe-sounding one that should play well over the years, radiant and amiable, with plenty of lyrical sentiment expressed throughout. If I still think that past masters like Otto Klemperer (EMI), Adrian Boult (EMI), Claudio Abbado (DG), George Szell (Sony), and Bruno Walter (Sony) offer more in the way of idiosyncratic voice and expression, it doesn't mean I wouldn't want Alsop around for comfort, especially at so modest a price. Coupled with eight of Brahms's Hungarian Dances, comparably well performed, the disc is, in its own way, almost irresistible.

The sound is quite as comfortable as the performances, too, being warm and plush and cushy. However, in overall transparency the Naxos sonics don't match those on the Klemperer or Boult discs, recordings that are some thirty and forty years older than the 2005 Alsop disc. Oh, well, the Naxos record has a breadth of sound and a depth of image that make up for any minor lack of detail.