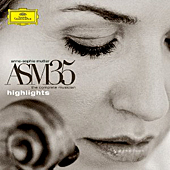 This CD set shows my age. I continue to think of German violinist Anne-Sophie Mutter as a young, new musician, so you can imagine my surprise when I saw the title of this new collection, Anne-Sophie Mutter, ASM35: The Complete Musician.  "ASM 35"? The set celebrates Ms. Mutter's thirty-fifth year as a performing musician, making her stage debut with Herbert von Karajan and the Berlin Philharmonic in 1976, her debut at the Salzburg Festival and the English Chamber Orchestra under Daniel Barenboim in 1977, and her recording debut with Karajan on DG in 1978. Remarkable how time flies.

The present two-disc set is actually a highlights collection drawn from a huge forty-disc limited-edition box set of Ms. Mutter's DG recordings. Playing with a variety of accompanists, conductors, and orchestras, the set spans her career more-or-less chronologically from 1974 to 2008. Of course, most of the pieces are merely segments of larger works, in many cases single movements of longer concertos. Still, it gives you an idea of her accomplishments, her artistry, her style, her virtuosity, and both her passionate and poetic moods. Let me mention a couple of things that stand out for me.

The first notable item on disc one (after a brief Prokofiev solo from 1974) is the Allegro from Mozart's Violin Concerto No. 3, with Karajan and the Berlin Philharmonic from 1978, Ms. Mutter's first big hit recording (and one I still have in my own record library). There is not a hint of immaturity about her playing, and Karajan's support is brilliantly sympathetic. Indeed, this is still my favorite Mutter recording of all. Next, she does the Andante from Brahms's Double Concerto with cellist Antonio Meneses, conductor Karajan, and the BPO, from 1983. She makes a perfect partner for Meneses, and the two young performers build the tensions beautifully, if a little slowly, sedately. After that is the finale from Bruch's Violin Concerto No. 1, also with Karajan and the BPO, this one from 1980.  Here, we find Mutter at her most Romantic, even though there is little sentimentalizing of the music, which displays a lovely bounce and lilt. Sarasate's Zigeunerweisen, with James Levine and the Vienna Philharmonic from 1992 comes filled with swagger. Finally, on disc one is a live recording of the third-movement Allegro from Brahms's Violin Concerto, with Kurt Masur and the New York Philharmonic from 1997, which hasn't quite the sweet, lyrical feel of her earlier recording with Karajan but still expresses much joy and satisfaction.

Disc two opens with a live recording from Copenhagen of the "Winter" concerto from The Four Seasons, recorded in 1999. Again, we get a rather soft, Romantic approach to the score, yet it is quite heartfelt, the accompaniment a bit foursquare, and the sound fairly bright and forward. A highlight of the second disc is a sensuously played Gershwin number, "It Ain't Necessarily So," with Ms. Mutter accompanied by Andre Previn on piano. Another live recording comes from Mutter, Masur, and the NY Phil in 2002, this time the Rondo from Beethoven's Violin Concerto. It was, I believe, her second recording of the Beethoven, this one just as lyrically played, if marginally more intensely; too bad about the live sound, though.

The rest of disc two offers mostly live recordings from the 2000's, live apparently being the only way for big companies and big orchestras to record economically anymore. None of it sounds as good as the studio material on the first disc. Anyway, I enjoyed the Allegretto from Mendelssohn's Violin Concerto pretty well, recorded in 2008 with Masur and the Gewandhaus Orchestra. It's typically smooth, balmy, and quiet, maybe a little lightweight but certainly lustrous enough.

There is quite a lot of other material on the two discs as well, too much to go into. Let it suffice to say that if you enjoy Ms. Mutter's usually delicate yet virtuosic approach to music making, you'll like this collection of excerpts. Maybe it will even prompt you to buy one of her discs of complete works, which I suspect is one of the main points of the set.