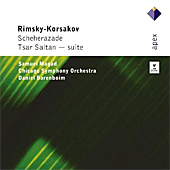 Nicolai Rimsky-Korsakov (1844-1908) wrote his symphonic suite Scheherazade, Op. 35, in 1888, loosely basing it on the mood of tales from the Arabian Nights, saying "All I desired was that the hearer, if he liked my piece as symphonic music, should carry away the impression that it is beyond a doubt an Oriental narrative of some numerous and varied fairy-tale wonders and not merely four pieces played one after the other and composed on the basis of themes common to all the four movements." Certainly, it would become the most-popular thing the man ever wrote and one of the most widely played and widely loved pieces of music in the classical repertoire.

The composer titled the first movement The Sea and Sinbad's Ship. In Maestro Daniel Barenboim's reading, compared to conductors like Beecham (EMI), Reiner (RCA), Haitink (Philips), Kondrashin (Philips), and Mackerras (Telarc), things seem a little under-characterized. However, in its favor there is no exaggeration, no glamorizing of the score. Then, too, the conductor loses a bit of something in his pointing of dynamic contrasts, the phrasing being a touch limp at times. These are quibbles, of course, in an otherwise fine rendering, with Samuel Magad's violin providing a sensuous narration and the Chicago Symphony Orchestra responding resplendently. Following that, The Story of the Kalandar Prince comes across beautifully in its poetic sections, even if the more-exciting parts appear a bit flat.

In The Young Prince and Princess Barenboim conveys a lovely lyrical mood as the romance unfolds. And then in the big finale that follows, Festival in Baghdad; The Sea; Shipwreck, Barenboim continues the romantic spirit, if failing to generate as many outright thrills as his rivals. So, overall, what we get is a fairly ordinary performance, with some good points and some mediocre ones.

The disc program ends with the Suite from Tsar Saltan, which includes The Tsar's Farewell and Departure, The Tsarina in a Barrel at Sea, and The Three Wonders. Here, I thought Barenboim brought out more color in the score than he did in Scheherazade. He seems to be having more fun with the music, too, and it comes across in a bouncier, more-playful style. I wonder if he wasn't taking Scheherazade too seriously. I dunno.

Originally, it was Erato who made the recording at Orchestra Hall, Chicago, in 1993, re-released by Warner Classic in 2011. The sound is very clean and clear, with plenty of transparent midrange texture, orchestral depth, hall ambience, and dynamic range. Although the extension of bass and treble is only moderate, not extraordinary, the upper strings display a realistic, perhaps compensating, sheen. So whether you like the performance or not, at least the sound is pretty good.