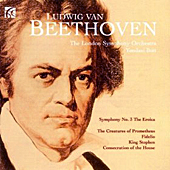 Is the world really waiting with bated breath for yet another recording of Beethoven's "Eroica" Symphony? Well, actually, no, particularly when there is already a plethora of good recordings available from conductors like Otto Klemperer (EMI), Sir John Barbirolli (Dutton Lab), Karl Bohm (DG), Leonard Bernstein (Sony), Philippe Herreweghe (PentaTone), David Zinman (Arte Nova), Paavo Jarvi (Sony), Klaus Tennstedt (EMI), even a cheerfully bizarre one from Hermann Scherchen (HDTT). However, when we hear a new issue performed and recorded as well as Yondani Butt's version with the London Symphony, it might be enough for Beethoven fans to give it a try.

Butt moves along the leadoff Allegro con brio at a commendably energetic pace, "with brio," with vigor and vivacity as Beethoven marked the tempo. Maybe Butt just understands the chemistry of the music; after all, how many other conductors have a Ph.D. in chemistry as Maestro Butt has. Just as he will do throughout the symphony, Butt emphasizes the contrasts: fast and slow, loud and soft. It makes for an exciting opening segment.

The second-movement funeral march can often be the downfall of a conductor, taking it too sluggishly and losing strength or too quickly and losing gravitas. Butt falls somewhere in the middle. While Klemperer and Barbirolli could get away with slow tempos here by injecting them with vitality and a steady forward pace, Butt's speed seems at first a tad too hesitant and spongy. However, when he reaches the climax of the movement about three-quarters through, it is another monumental contrast, and it goes a long way toward selling what could have been too soft an approach.

The Scherzo has plenty of zip and skips happily along with its syncopated rhythms. Then, the spirit of the Scherzo leads unaffectedly into the equally vibrant Finale, which Butt treats quite triumphantly, yet with high good cheer, if also with a slight degree of calculation. No matter, as he ensures the work ends on a high note, figuratively speaking.

At the time of the Third Symphony's première in 1805, some critics complained about its excessive length. Today, we take such lengths for granted as normal, the symphony having had such an influential impact on music thereafter. Indeed, the symphony's length is rather modest by current standards, so much so that Nimbus Alliance are able to fit four Beethoven overtures on the disc as companion pieces.

The Creatures of Prometheus, Fidelio, King Stephen, and Consecration of the House come off well, with the customary vigorous refinement we have come to expect from Maestro Butt. I especially liked the thrilling vivaciousness of Fidelio and the inevitable contrasts, again, in King Stephen.

What a pleasure, too, listening to a new recording that a company didn't do live. This one Nimbus Alliance recorded at Abbey Road Studio 1 and released in 2011. Along with Symphonies Nos. 6 and 7, issued separately, they figure to be the start of a complete and welcome new Beethoven cycle.

Anyway, the sound is quite good, if perhaps a little more veiled than the much-older Klemperer and Barbirolli recordings I mentioned earlier. Nevertheless, without the direct comparison, I doubt that anyone would have any objections, the concern is so slight. More to the point, the Nimbus Alliance disc provides a wide dynamic range and a strong impact, with excellent timpani rolls; a smooth and well-extended frequency response, if a touch soft; a modest degree of orchestral depth; and a pleasant amount of reverberant bloom for a realistic hall ambience.