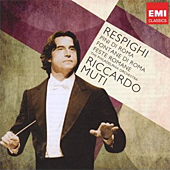 Italian musician, teacher, and composer Ottorino Respighi (1879-1936) wrote his Roman Trilogy after studying with Nikolai Rimsky-Korsakov, which may have been where he got the idea for creating such pictorial material. Riccardo Muti and his Philadelphia Orchestra offer up excellent interpretations of all three parts of the Trilogy, the Fountains, Pines, and Festivals of Rome. Perhaps they are not quite so distinctive as those of Fritz Reiner in his old Chicago Symphony recording of the Fountains and Pines (RCA or JVC) nor as smoothly sophisticated as those of Charles Dutoit and his Montreal Symphony (Decca), but they are quite well characterized, nevertheless.

Although Respighi wrote the Fountains of Rome first (1917), it's the Pines of Rome (1924) that opens the disc, possibly because it's the most-popular work Respighi ever composed. The Pines opens with a big splash of color in "The Pines of the Villa Borghese," which Muti treats in appropriately bright, splashy fashion. The fact is, Muti's accounts of the three scores are among the best, most vivid you'll find. Then the second movement, "Pines Near a Catacomb," is initially gloomy until Muti opens the music up to a sincere melancholy, longing, and finally regal dirge. After that, Muti makes the third movement, "del Giancolo" pines, with its song of the nightingale, as lovely as I've heard, the tone relaxed and serene. It is a prelude, really, to the big finale, the "Pines of the Appian Way," possibly the single most-famous thing Respighi ever created. The march of ancient Roman soldiers as they return home along the Appian Way interrupts the tranquility of Nature and the chirping birds. Here, Muti captures the mounting urgency of the music, moment by moment, pretty well until it reaches a fevered climax, and Muti pulls out all the stops.

The Fountains of Rome are more festive and, for me, more colorful and descriptive than the Pines of Rome. Each of the four movements describes a celebrated fountain in Rome, the music, as in the other works, playing without a break. We hear noises of the country, noises of the city, noises of mystical creatures, and noises of crowds, among many other things, the music finally fading away into silence as night falls. In the Fountains, Muti is even more expressive than he was in the Pines. I love the way he flirts with Respighi's flashes of light and shadow throughout, and in the "Trevi al meriggio" fountain, Muti is at his best.

The Roman Festivals (1929) are for me (and probably many other listeners) the least-successful parts of the Trilogy. Respighi appears to have been trying to top himself in the work, and the music becomes somewhat hectic and bombastic as a result. At least Muti doesn't vulgarize the score, but there's not a lot he can do with it in any case.

EMI recorded the music at Memorial Hall, Fairmount Park, Philadelphia, in November of 1984. The engineers appear to give us on this 2011 reissue a transfer made for their first CD release of the material back in 1985. I could hear no differences in direct comparisons. Still, there's nothing wrong with that, since the sound is fairly decent. There is a forward quality in the upper midrange, however, that results in a certain degree of shrillness at times; it may or may not distract one from the performances, and in any case it comes and goes. The celebrated Philadelphia strings provide a velvety sheen, yet the sound does not seem so well upholstered as from some other recordings of this music. There's a slightly lean tendency to the EMI Philadelphia sound most of the time, with a wide range, solid impact, and reasonably deep bass. Still, it's not as impressive sonically as the Reiner disc I alluded to earlier, recorded, amazingly, in 1959.