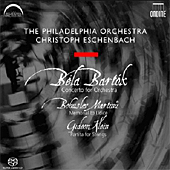 I have been saying for years that live recordings give up too much in audio quality for any potential benefits in spontaneity, but occasionally one like this disc sort of contradicts expectations. It's an excellent live recording of three equally excellent performances and gets high marks on all counts.

Christoph Eschenbach is in top form, and his Philadelphia players have never sounded better in works that commemorate the sixtieth anniversary of the end of the Second World War. This is not to say that the music is entirely solemn, but it is appropriately elegiac and reminds us again of the horror those times.

Czechoslovakian composer Bohuslav Martinu's Memorial to Lidice remembers the town of Lidice, which the Nazis destroyed in retaliation for the assassination of a regional governor. It's a short work, about a dozen minutes long, but it is powerful, growing in tension and intensity as it proceeds. Another Czech composer, Gideon Klein, tragically died young in a Nazi concentration in 1944, composing his String Trio while in prison the year of his death. Eschenbach plays an arrangement for string orchestra made in 1990. These three movements, too, are heartfelt, made all the more so considering the circumstances under which Martinu wrote them.

The star attraction, however, is Hungarian composer Bela Bartok's celebrated Concerto for Orchestra, of which there must be dozens of recordings. Place this one among the best, the folk-inspired outer movements full of vitality and the central "Elegia" mournful and moving, with a note of life-inspiring freshness always present in all five sections.

Ondine made the recording live, as I say, in Verizon Hall, Philadelphia, during May of 2005 and reproduced in five-channel SACD, two-channel SACD stereo, and two-channel CD stereo. The listener may play the hybrid disc in any conventional CD player or in an SACD player. Because the miking is slightly closer than is often the case in a live recording, we get less audience noise. During the whole of the presentation, I did not hear any coughs, wheezes, or sneezes; indeed, I was only aware of the audience at all when they broke out into an unfortunate applause after the final number. In the meantime, we get a wide soundstage, reasonably clear sonics, a minimum of compartmentalization, and some excellent transient response. The SACD layer appeared to me a bit cleaner and less fuzzy than the regular CD layer and a touch more dynamic; plus, of course, if you have five channels you should notice the additional hall ambience.