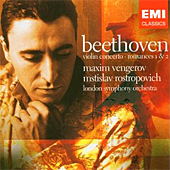 This is one sweet recording, from Vengerov's violin playing to Rostropovich's conducting and the LSO's accompaniment to the sound the EMI engineers capture at their famed Abbey Road Studio No. 1. This isn't to say the disc will please all listeners, but it may at least be interesting for its somewhat unusual approach.

Vengerov and company take a very Romantic view of Beethoven's Violin Concerto in D, Op. 61, an interpretation that is quite a bit slower and more sentimental than some of us have lived with for so long. The opening Allegro ma non troppo, for instance, is mostly gentle and laid back; it has less bite than Szeryng and Haitink (Philips) provide, less drama than Perlman and Giulini (EMI), and less show than Heifetz and Munch (RCA). Instead, Vengerov and Rostropovich provide a haunting, lyrical vision of the piece, steeped in emotion and punctuated by tremendously dynamic outbursts from the orchestra. Is it what we're used to? No. Is it what most listeners want? Probably not. Is it worth hearing? Sure thing, if only for the novelty.

It's in the second movement Larghetto, though, where Vengerov comes into his own, the slow, languorous variations sounding more mournful than ever. However, I have to admit that this approach loses a lot of weight in the Rondo finale, where much of Beethoven's intended exuberance and joy is rather sucked out of the music. So, it's kind of a toss-up whether audiences will find it a worthy alternative to the best recordings available.

If anything, it's the Romances Nos. 1 and 2 for Violin and Orchestra that come up best, sounding a little better suited to Vengerov's approach. Are they enough to sell the disc? I don't know.

The EMI sound engineers do their part as well to provide the rather soft, slow, cushy performance with a soft, cushy, yet fairly close recording. It's maybe a little too well upholstered for ultimate midrange definition, but except for some areas of violin-orchestra imbalance it suits Vengerov's leisurely reading and makes for easy listening.