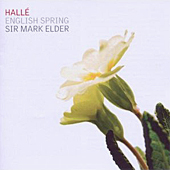 The Halle is the U.K.'s oldest orchestra (and fourth-oldest in the world), founded in 1857 and making its home in Manchester, England. Its current Music Director, Sir Mark Elder, has chosen for this album a program of pastoral music from early-twentieth-century English composers Arnold Bax, Frederick Delius, and Frank Bridge, the guys who specialized in such things.

The disc begins with Spring Fire, a suite of five impressionist tone poems by Arnold Bax (1883-1953). In it, Bax says he attempted to describe "the first uprush and impulse of Spring in the woods," and it comes complete with mythological woodland creatures. The first movement, In the Forest before Dawn, depicts a primeval forest in the hour before daybreak, a persistent drip from a recent shower providing the background. It's lovely and evocative, the best part of the score, and Elder and the Halle play it with an appropriate observation of still, quiet mystery.

The next movement, Daybreak and Sunrise, builds a lighter tone and leads to the sun's coming up in a sort of minor fanfare. Here, Bax's notes on the subject indicate the awakening of all sorts of legendary forest folk: nymphs, fauns, satyrs, and such rising with the glitter of the sun. Fair enough, although despite Elder's best efforts I didn't quite hear them.

Full Day comes crashing in with a sudden outburst of orchestral flurry. Then, once the clamor of daylight winds down, we hear Woodland Love. Bax marked the movement "romantic and glowing," and "drowsily." It sounds a lot like something his colleague Frederick Delius might have written--sinuous and meandering and, under Elder, a touch melancholy.

The work ends with Maenads, a boisterous chase through the woods as a band of merrymakers led by Bacchus and Pan fly after a group of maidens. It ends the day on a note of high-spirited fun and enjoyment. Spring has sprung.

Next up we find two pieces by Frederick Delius (1862-1934), an early one, Idylle de Printemps (Spring Idyll, 1889), and a later one, North Country Sketches: The March of Spring (1913-14). Both are folksy and serene, with the second piece setting a better focused, more-purposeful mood.

The program concludes with my favorite music, Enter Spring: A Rhapsody for Orchestra, by Frank Bridge (1879-1941). Bridge wrote it in 1927 as more than a subjective, impressionistic piece; it paints a fairly rousing picture of the emerging season. Elder seems to take the greatest joy in this music, too, giving it all the vitality and life it needs. At about twenty minutes, it is also the longest and most-complex number on the disc. I've long cherished an EMI recording of Bridge's work by Sir Charles Groves and the Royal Liverpool Philharmonic to which this performance by Maestro Elder compares most favorably.

The Halle Concerts Society recorded tracks 1-6 live in the Bridgewater Hall, Manchester, in 2010, the sound somewhat soft, moderately distanced, warm, and sweet. An unfortunate applause interrupts one's pleasure after the Bax suite. Tracks 7 and 8 they recorded in BBC Studio 7, also in 2010, to much better effect. While the midrange is still more warm than transparent, the sound displays greater body and clarity, a stronger dynamic impact, and more-extended bass and treble response. It makes me wish the Halle had recorded the entire program in the studio.