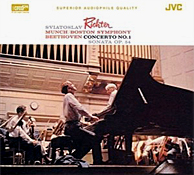 Ever since I first started listening to things like JVC’s XRCD audiophile remasters, I’ve become rather spoiled by them. Take, for instance, this Beethoven First Piano Concerto recorded more than half a century ago. The sound is rock solid. Not like most of today’s classical recordings that to me can appear misty, cloudy, fuzzy, excessively soft, or overly hard. With the exception of a touch of background noise (and, especially, a discernible bass hum), this older recording from JVC sounds just right, especially the piano, which is strong and steady in an unexaggerated way. The JVC XRCD issues may be expensive, but they provide great pleasure.

Sviatoslav Richter was a legend in Soviet Russia before being allowed to record in the West. When he did begin recording in America, among the companies he worked for was RCA in their “Living Stereo” series, one of the best places for any artist to record. Here, backed by Charles Munch and the Boston Symphony Orchestra, Richter brings a robust vitality to this first of Beethoven’s five piano concertos. The fact is, I hadn’t really thought about Richter’s recording much in quite a while until hearing it on this JVC release. It had been many, many years since I had first heard it, and I hadn’t remembered it being so thoroughly Romantic or so thoroughly powerful as it is, nor had I remembered how lovely and embracing the slow movement could be under Richter. Perhaps it’s just that Richter brings out the best in the music, I don’t know. Going back and listening to relatively newer recordings by pianist Stephen Kovacevich with conductor Colin Davis on Philips and Murray Perahia with Bernard Haitink on Sony, also favorites, I found them good but not nearly so dynamic or persuasive as Richter. 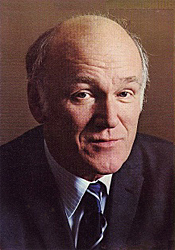 I have sometimes found Munch and the Boston Symphony sounding thin, steely, and hard in their early RCA releases, but not quite here. There may be a touch of hardness to the sound but nothing thin or bright about this recording, made at Boston’s Symphony Hall in 1960. It is, if anything, darkly aggressive and absolutely stable, well complementing Richter’s sturdy, energetic, and wholly realistic piano.

The companion piece on the disc, Beethoven’s Piano Sonata No. 22, also comes off in a most vigorous and dramatic fashion. Richter’s way with the keyboard is both precise and incisive, making each note sound out loudly, clearly, purposefully. As with the Concerto, the Sonata offers a most impressive performance and a worthy coupling.

Naturally, for about a third the cost you can get Richter’s performance of the Piano Concerto and two sonatas on a mid-priced RCA release, but you wouldn’t get the sonic impact of the JVC. I cannot recommend any of JVC’s XRCD audiophile discs unconditionally, given their cost, but I can say that if you want the best, you pay the price.