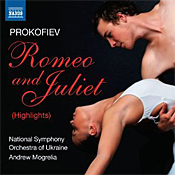 When Russian pianist, conductor, and composer Sergei Prokofiev (1891-1953) first presented his now-popular ballet Romeo and Juliet to the Bolshoi Ballet in 1935, they promptly pronounced it “undanceable.” Soon after, the public heard suites from the ballet, but they did not get to see it performed until 1938, the version we hear nowadays usually the revised 1940 score. Maestro Andrew Mogrelia and the Ukraine National Symphony Orchestra recorded the full ballet in the mid Nineties for Naxos, originally issued in a two-disc set, and what we have here is a generous selection of highlights on a single disc.

Mogrelia gives us an atmospheric account of the score rather than an exciting, thrilling, or passionate one, with rather more odd tempo changes than I’d prefer between and within individual movements. Often, he favors a slower, more deliberate pace than some other conductors, which I’m sure dancers would prefer.

It worried me at first that the opening scenes in Verona's streets were a little too tame to catch fire, foreshadowing a degree of banality to come; but by the time of the Capulet party, things pick up considerably. Mogrelia is at his best, though, in the lyrical dance sequences and in the smaller, more intimate love scenes, where he builds the various tensions unerringly.

Since Prokofiev intended his score be highly graphic, taking us carefully through Shakespeare’s play practically scene by scene, the music is open to a wide range of interpretation. Befitting Shakespearean tragedy, with Mogrelia we get more emotion in the slower segments, yet with not always the passion or impulsive youthfulness the music demands. Even though Mogrelia reaches out and touches our heart at times, he leaves out a little of the melodrama.

So, while Mogrelia tends to tame the more boisterous parts of the music, he handles the more lyrical, romantic, and tragic sequences with a delicate hand. Maybe “The Duel” and “The Death of Mercutio” could be more exciting, but “The Young Juliet” at the beginning and “Juliet’s Death” at the end are most graceful and affecting.

The booklet notes describe the tracks pretty well, each segment clearly labeled to summarize the action of the plot. Not that Prokofiev’s work needs much explanation, the music already being so colorfully descriptive. Anyone familiar with Shakespeare’s play should have no trouble following the plot. 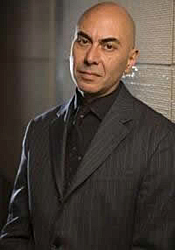 Some people may disagree with the choice of highlights Naxos have assembled, and if that’s the case, one can always buy the complete ballet and program one’s own selections. Or perhaps a recording of the two ballet suites would be more to one’s liking. In any case, my own preferences in this music remain the complete recordings by Andre Previn and the London Symphony Orchestra (EMI), Lorin Maazel and the Cleveland Orchestra (Decca), and Vladimir Ashkenazy and the Royal Philharmonic Orchestra (Decca).

Naxos recorded the complete ballet at the Concert Hall of Ukrainian Radio in 1994 and released this current set of highlights in 2012. The audio is quite nice, one of Naxos’s best-sounding recordings. It’s big and full, and a little close, with a wide stereo spread and a moderately good sense of depth. Midrange clarity and transient response are first-rate, and bass, though modest, is effective. The treble appears well extended, although the upper strings sound just a tad forward. It’s true that occasionally one notices that sections of the orchestra seem compartmentalized, yet it’s hardly anything of concern. It’s quite enjoyable sound.