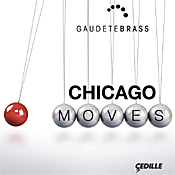 If you’ve never heard anything from the Gaudete Brass quintet before, you probably aren’t alone. They formed in 2004, and this Cedille album, Chicago Moves, is I believe only their third CD release. However, judging by the quality of their music, I should think it will be far from their last. The group’s goal is to present “serious brass chamber music at the highest level of excellence” and to encourage a “worldwide appreciation of the art of brass chamber music through live performances, recordings, education, and the creation of new works.” The present album contains six new pieces written expressly for the Gaudete Brass ensemble, all in world-premiere recordings, plus one slightly older work.

The program begins with the brief tune Gaudete by James Woodward (b. 1978). “Gaudete” means “rejoice” in Latin, so that’s what this opening music is all about. It sounds a cheerful, sometimes cheeky note, with some entertaining little harmonies bouncing around in it.

Next is the Sonata for Brass Quintet, a work in three movements by John Chetham (b. 1939). The first movement is sprightly, the second lyrical, and the third big and energetic. This is probably a better piece for demonstrating the prowess of the Gaudete Brass, their playing smooth, sophisticated, spontaneous, enthusiastic, and highly accomplished. The five members of the Gaudete Brass--Bill Baxtresser and Ryan Berndt, trumpets; Julia Filson, horn; Paul Von Hoff, trombone; and Scott Tegge, tuba--seem genuinely to be having fun playing this music together, and their joy is infectious.

After that is A Great Commercial City by Brian Baxter (b. 1985), the title referring, of course, to Chicago, the Gaudete Brass’s home port. Baxter based the piece loosely on the folk song “El-a-noy.” It may remind some listeners of Carl Sandburg’s famous ode to Chicago in spirit if not in tone: “Strong, husky, brawling, City of the Big Shoulders.”

Then, there’s Helios by Stacy Garrop (b. 1969). Helios was the Greek god of the sun, and the music describes his chariot ride across the sky. It begins with a fast and fiery sunrise and ends in a serene, sunset mood. Of all the music on the disc, this one is so well played, it stood out as one of my favorites.

Following that is the simply titled Brass, a three-movement piece by Rob Deemer (b. 1970). It explores the various sounds and textures of the brass instruments, a sort of “Young Person’s Guide to the Brass Quintet.” It’s the most-colorful music on the program, and the Gaudete ensemble make the most of it, offering up a joyous celebration of their own group. The movement “Slide” is particularly playful.

The final premiere is the title tune, Chicago Moves, a four-movement work by David Sampson (b. 1951). This one is also about the city of Chicago, going into more detail describing aspects of the place and its landmarks. Each movement is a kind of individual tone poem. 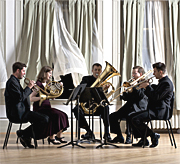 The album concludes with Copperwave, a Latin American-inspired piece by Joan Tower (b. 1938), which she wrote in 2006. It’s also a first of sorts, though, using a tuba rather than a bass trombone. Ms. Tower writes about it that “copper is a heavy but flexible mineral...and most brass instruments are made of copper. The ideas in this piece move in waves, sometimes heavy ones and at other times lighter--also in circles, turning around on the same notes.” It, too, is playful music, which brings out all the dramatic unity and immaculate playing technique of the Gaudete Brass.

Cedille’s topflight engineer Bill Maylone recorded the Gaudete Brass at Goshen College, Goshen, Indiana in 2012. He miked it at a moderate distance, the sound obtained quite realistic. The stereo spread does not extend across the room, nor should it. Rather, we hear the sound of a well-integrated group of musicians playing in a mildly reverberant acoustic, with a good separation of instruments and no compartmentalization. The various members of the group sound as one, instead of a collection of separate players, which is all for the good. It’s the way any ensemble would sound in a real life, round and resonant. While midrange transparency is not as absolutely pristine as one might find on an audiophile disc, there is more than adequate air and depth to the sound, further promoting the feeling of actually being in the hall at a modest distance from the group.