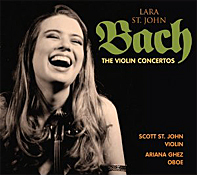 This 2012 album contains Bach’s two Violin Concertos and the Double Concerto that violinist Lara St. John and her brother Scott released about a decade before, but the album now also includes Bach’s Oboe and Violin Concerto, recorded some eight years later. Here’s the thing the disc illustrates: Ms. St. John’s playing style, execution, and presentation has improved over the years as maturity has tempered some of her youthful enthusiasm and further heightened her virtuosity. So for me the disc’s earlier-recorded Bach may not be among her best work, although it is still worth one’s attention.

Earlier this year, I had heard much of this music from violinist Anne Akiko Meyers and the English Chamber Orchestra on an eOne Music CD that I greatly admired. Thus, fair or not, it was with fond memories of Ms. Meyers’s fine interpretations that I listened to Ms. St. John’s album.

The first thing I noticed about the outer movements of the solo Violin Concertos is that Ms. St. John plays them fast. While they’re not breathless, they are quicker than most readings, quicker even than the period-instruments’ recording with La Petite Bande I hand on hand.

The next thing I noticed is that although the fast movements zip right along at a vigorous clip, they aren’t necessarily more exciting, more involving, more insightful, or more penetrating for all their speed than many more-relaxed renditions. Ms. St. John is simply...fast.

After that, I noticed that the slow inner movements are actually slower than ones I usually hear. There’s nothing wrong with this, either, especially since it does nothing seriously to harm or disrupt the beauty of the movements or the integrity of the work as a whole. Still, it probably creates more of a contrast than some listeners may care to hear.

Then, I also noticed a certain rigidity of attack throughout, without much gradation, ornamentation, or variation of nuance. Again, Mr. St. John’s interpretative manner might please listeners who prefer a fleet, unadorned approach, while it may simply strike other listeners as too complacent, too safe, merely a proficient playing of the notes without much feeling behind them. In other words, there is a degree of sameness about Ms. St. John’s renderings of the solo Violin Concertos, despite the vigorous playing. Fortunately, as I said earlier, Ms. St. John seems to have learned over the years to combine her passionate performance style with a genuine understanding of the music, as evidenced by her more-recent recording of the Mozart Third Violin Concerto for Ancalagon. 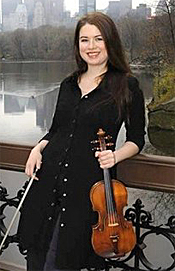 Contrary to my feelings about the Violin Concerto tracks, however, I rather enjoyed the Double Concerto, which Ms. St. John performs with her brother Scott. Here, she puts her brisk pacing to use better here than in the solo affairs, keeping the music always on its toes so to speak and involving at least this listener thoroughly.

Finally, we come to Bach’s Concerto for Oboe and Violin, on which oboist Ariana Ghez joins Ms. St. John, with Maestro Eduardo Marturet and the Simon Bolivar Youth Orchestra of Venezuela in support. This seemed to me the best performance on the disc, even though I didn’t care for the sound as much. The interpretation is graceful, flowing, easygoing, yet fully committed. It glides along effortlessly, carrying the listener with it. There even seems to be a better interaction between the soloists and the orchestra. Very nice.

Audio engineer Adam Abeshouse recorded the two Violin Concertos and the Double Concerto at the Academy of Arts and Letters, New York City, NY, in 2000, and the Avie label originally issued the album in 2002. Engineer Jose Leonardo Pupo recorded the Oboe and Violin Concerto at Sala Simon Bolivar, Centro de Accion Social por la Musica, Caracas, Venezuela, in 2008. In the New York sessions we hear a very smooth response, slightly close and well detailed. There is not a lot of depth involved, however, and not quite enough air around the instruments to provide an absolute realism. Compared to the Meyers/ECO recording on eOne I mentioned earlier, the St. John recordings also appear a tad veiled. In the final work on the disc, the orchestra is a bit more distanced, a bit thinner sounding, and a bit brighter in the strings. Neither of Ms. St. John’s recording venues quite contribute to sound of audiophile quality.