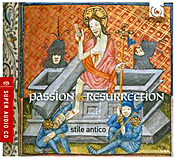 Stile Antico (“ancient style”) is an early-music vocal ensemble of British singers who formed in 2001 and specialize in music of the Renaissance and early Baroque. They have already recorded half a dozen albums for Harmonia Mundi, and this latest one, Passion & Resurrection, offers a series of thirteen selections based on texts inspired by Holy Week and Easter. It presents a cross-section of composers from England and the European continent that take the listener from Jesus’s entry into Jerusalem on Palm Sunday through His Last Supper on Maundy Thursday, the Crucifixion on Good Friday, and the resurrection on Easter day.

The program begins with William Cornysh’s “Woefully Arrayed,” a poem given fresh musical fittings from John McCabe over four centuries (and five tracks on the disc) later. McCabe’s version is a little secular sounding but still reverent. Did I have any favorites among the selections? Certainly, Thomas Tallis’s “O sacrum convivium” encapsulates everything good about this early musical genius. It’s beautiful in its harmonic structure and sung to perfection by Stile Antico.

There is an especially intent devotional quality to Cristobal de Morales’s “O crux, ave” that is hard to resist. And Thomas Crecquillon’s “Congratulamini mihi” is lovely in the extreme, while exuding a feeling of joyfulness, exultation, and inspiration. But to pick favorites among so many engaging tunes is fruitless. Take your pick; they’re all a joy.

The singing is the special pleasure of Stile Antico, though. Although there are only about fifteen persons involved in this particular production, they sound almost like a full choir, their voices blending so well, their harmonies so exacting, their tone and timber so precise, so lilting, lyrical, and soaring. I think I could listen to them sing anything. For the record, they are Helen Ashby, Kate Ashby, Rebecca Hickey, and Alison Hill, sopranos; Emma Ashby, Eleanor Harries, Carris Jones, and Martha McLorinan, altos; Jim Clements, Andrew Griffiths, and Benedict Hymas, tenors; and James Arthur, Will Dawes, Oliver Hunt, and Matthew O’Donovan, basses. You’d swear there were two or three times their number singing. 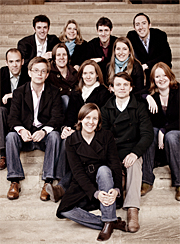 Recorded in exemplary fashion by Harmonia Mundi at All Hallows Church, Gospel Oak, London in 2012, the sound is most pleasing on the ear. HM recorded it in stereo and multichannel on this SACD hybrid disc, so depending on your playback equipment, you can listen to it either way; I listened in stereo on an SACD player, and it sounded splendid. There’s a sweet ambient glow around the voices, making them sound very much in a large, mildly reverberant church acoustic. However, the resonance is not so great as to cloud, veil, or diminish the vocals in any way. It simply makes them appear richer and fuller. The ensemble sound entirely natural in this setting, the voices miked at a moderate distance to provide a realistic presentation, the singers sounding warm, smooth, and lifelike, never bright or edgy. Each section of the choir--indeed, each individual member--comes across clearly and distinctly.