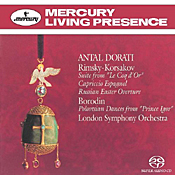 Much of the material here dates from the earliest days of stereo, but because it’s a Mercury Living Presence recording, you’d hardly know it. Dorati was flourishing making recordings with the LSO in the mid Fifties and Sixties, and this disc, issued originally on two separate vinyl albums, one in 1956 and the other in 1959, is no different. The performances all sparkle, sonically and interpretively.

Things start out with the Capriccio Espagnol, given a rousing and characterful treatment by Dorati. It does not eclipse my favorite recording with Kiril Kondrashin on a remastered JVC, itself an ancient 1958 production, but it comes close, played with great character and verve. The suite from Le Coq d’Or, however, is peerless--vibrant, colorful, alive with musical nuance and detail; I loved every part of it. Following that we find the Russian Easter Overture, also well done, if sounding to my ears a tad rushed in spots. 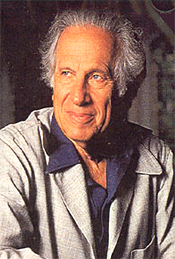 The program concludes with Borodin’s “Polovtsian Dances” from Prince Igor, and if it weren’t for Sir Thomas Beecham’s classic recording (EMI), Dorati would take top honors. Nevertheless, Dorati demonstrates plenty of pizzazz, plenty of panache in the music.

Mercury’s sound is much as we expect from this source, having been recorded with three microphones across the front of the stage, here reproduced in SACD three-channel or, if you have only a regular CD player, in two-channel stereo. I admit there is a certain small degree of boxed-in closeness about the sound, as though Mercury had applied a tad too much noise reduction to the lower treble, but it doesn’t interfere with the highest notes, which shimmer and glisten convincingly. Then there is the lowest bass in the Coq d’Or that is every bit as deep and impressive as anything made today. If you don’t already own these particular recordings or the music at all, Mercury’s hybrid SACD seems a good place to start.