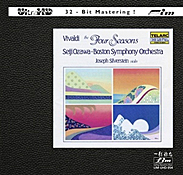 When I first heard this recording in the early Eighties, Telarc had just released it on LP, and I’m afraid at the time it did not particularly impress me. As I recall, I found the performance too refined, too sedate, for my taste. I guess I had by then become used to more lively performances, many of them by period-instruments bands, and thought violinist Joseph Silverstein, conductor Seiji Ozawa, and players from the Boston Symphony Orchestra a bit too genteel for me. Well, that was then and this is now. Listening anew to the album in a recent LIM UltraHD audiophile remaster, I must admit the performance is rather refreshing and its approach not quite as relaxed as I remembered.

Sure, Italian violinist and composer Antonio Vivaldi (1678-1741) wrote hundreds of pieces of music, yet most people probably only know him for his Four Seasons violin concertos, the little tone poems with their chirping birds, galumphing horses, barking hounds, dripping icicles, and howling winds. Meant to accompany four descriptive sonnets, they make up the first four sections of a longer work the composer wrote in 1723 titled Il cimento dell'armonia e dell'inventione (The Contest between Harmony and Invention). People hardly remember the other eight concertos in the set.

Silverstein begins the Spring Concerto at a deliberate pace, yet it isn’t slow or heavy. Where Silverstein’s performance, played on a 1742 Guarneri del Gesu violin, comes to the fore, however, is in the slow movement, where it is exquisite in its execution. Neither Silverstein nor Ozawa attempts to embellish the music any further than necessary so, no, we don’t get quite as imaginative an interpretation as, say, that of Alan Loveday with Neville Marriner and the Academy of St. Martin in the Fields (Decca). Not that this is any kind of shortcoming, you understand. Indeed, Silverstein’s more direct, more traditional rendition is quite fetching, as I say.

Summer comes off well, too, and seems just as lively in its own way as Spring, perhaps more so. Silverstein’s violin tone is both velvety smooth and expressively animated. By the time he’s into the Presto, he’s worked up quite a head of steam and ends the music in high good spirits.

Autumn sounds rather plan and simple, especially in the beginning. There may be too much of a good thing in simplicity. Nevertheless, the playing sounds so cultured, it grows on you.

Finally, we come to the Winter Concerto, a section that for some soloists and conductors can be a bit vexing. The cold chattering of teeth and the running through the ice and snow require some finesse, which Silverstein and company pull off well. OK, maybe they actually get a little too hectic as they go along, but it is nonetheless quite colorful. The Largo’s “contented days by the fire” Largo are maybe a tad perfunctory, yet the performers make up for any small lapses with the swirling gales of the final movement. Fun stuff. 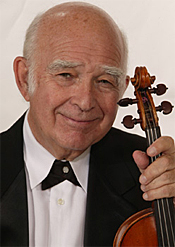 Drawbacks? Not really. The disc is expensive, to be sure. And there is no content beyond the four concertos, about forty minutes. Think of it as quality over quantity for those who can afford it.

Telarc Records originally made the album in Houghton Chapel, Wellesley College, Wellesley, Massachusetts in 1981. LIM remastered the recording in 2012 using their UltraHD 32-bit mastering system, a meticulious method of transferring material from the master tape to disc. The recording itself is relatively close, providing firm body, strong transient attack, and plenty of detail. What’s more, the chapel acoustic provides a pleasantly realistic glow to the music, a bloom that never detracts from the clarity of the sound; inner detailing, in fact, is now better than ever. More important is that the sound appears well balanced, with no sign of brightness, forwardness, edge, boom, softness, or the like to interfere with its lifelike playback.

Although I’m still partial to hearing The Four Seasons performed by a period-instruments band (putting the recording by the Philharmonia Baroque Orchestra at the head of the list), for a recording on modern instruments (excepting Mr. Silverstein’s violin), this one is as good as it gets, and you couldn’t ask for better sound.

As always, the folks at LIM do up the packaging in a first-rate manner, with a hardcover foldout case containing twenty-four pages of text and pictures bound inside and a stiff paper sleeve for the disc, which is further enclosed in a static-proof inner liner.