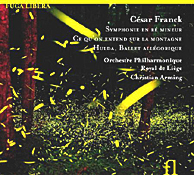 The idea of the coupling on this album was to bring together a big, popular work with several other, less well-known pieces by the same composer. This is hardly a new concept, and numerous other record companies and musicians have already done it. It does, however, present two problems: First, it is not exactly conducive to selling a ton of discs to have unfamiliar titles on it. Second, the lesser-known works may simply demonstrate to listeners how much better the more-favored work is. There is a reason, after all, for certain pieces of art being more popular than others; they are usually better. Nevertheless, for most classical-music fans, the little ballet suite and symphonic poem that accompany Franck’s Symphony in D are welcome additions.

The big, popular work, the Symphony in D minor by French (Belgian-born) composer, pianist, and organist Cesar Franck (1822-1890), opens the show. Franck wrote it, his only symphony, in 1888, premiering it in Paris the next year, shortly before his death. It received a poor reception at the time, thanks largely to the musical politics of the day (leading French musicians disliked Franck’s blend of German and French musical traditions), but has obviously since become a mainstay of the classical repertoire.

One of the unusual features of the Symphony is that Franck wrote it in only three movements. The first movement, marked Lento - Allegro ma non troppo, begins, as Franck notes, slowly and builds momentum, though never too fast. Leading the Liege Royal Philharmonic, Maestro Christian Arming takes his time developing the themes in this movement, increasing the pace methodically and never making any sudden tempo changes. Instead, he makes Franck’s many shifts of key and tempo seem entirely normal and expected, he integrates them so smoothly. Indeed, if one were to be highly critical at all, one might say Arming was a little too refined, that Franck requires more gusto, more bravura. I don’t know; what we hear is persuasive enough, with adequate power when needed.

The second movement, an Allegretto, contains Franck’s famously fetching French horn melody. Franck himself described this section as resembling “an ancient procession,” and listeners through the years seem to have agreed. That’s the way Arming plays it, as a long, slow march, with a more enlivening theme developing toward the middle. Yet Arming makes it appear as a logical extension of the processional design.

The final movement, marked Allegro non troppo, takes us back in spirit to the start of the piece and sounds generally cheerful and exultant. Because Franck used a typically French cyclic style for the themes, we hear variants of the opening motif reoccurring throughout the work. Arming supplies plenty of energy here, without sounding frenzied or exaggerated. His interpretation stands up as cultured and well tempered to the end.

My preferred recordings for the Franck Symphony remain those of Sir Thomas Beecham (EMI), Pierre Monteux (RCA), Charles Dutoit (Decca), and Marek Janowski (Telarc). However, Maestro Arming makes a good showing of it, and one should not discount his recording in any way.

The first coupling on the disc, Ce qu’on entend sur la montagne (“What one hears on the mountains”) is an atmospheric tone poem, creating a mood rather than depicting any specific scenes. It is quite a lovely piece of music, portraying a lonely, isolated place somewhere high up in the mountains. Arming draws out this Man vs. Nature motif nicely, providing a quiet sense of desolation without letting the music become morbid or depressing. 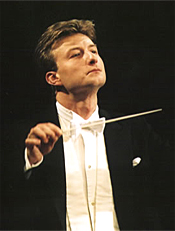 The second coupling, Hulda, Ballet allegorique, is something we almost never hear on record or in the concert hall. It’s a little five-movement ballet suite from Franck’s long-forgotten opera Hulda, and the music comes as a treat. Under Arming, it is alternately lyrical and exciting, and always charming. The question is why more conductors haven’t recorded it.

A generous eighty-one minutes of playing time caps off a fine release.

Fuga Libera (meaning “free flight”), a label of Outhere Music, recorded the album at Salle Philharmonique, Liege, Belgium, in 2012. The sound in the Symphony is a model of natural audio reproduction. The orchestra stands before us at a moderate distance, the listener appearing to be perhaps twelve rows or so back. One still hears a wide stereo spread yet with a modicum of orchestral depth and good tonal balance. Bass is only modest, the highest notes seem a bit muted, and played too loudly there is a touch of forwardness in the lower treble. Midrange transparency also suffers slightly, while remaining realistic from this perspective. The overall effect is warm and lifelike, making a most pleasant listening experience. For whatever reason, maybe a change in miking, the accompanying items sound a tad more open and dynamic.

Email ThisBlogThis!Share to TwitterShare to FacebookShare to Pinterest
Labels: Franck