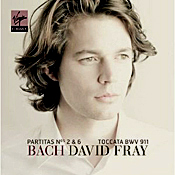 For anyone unfamiliar with the term, a “partita” is basically just a set of variations, which in the eighteenth century and Johann Sebastian Bach became a suite for solo instrument. In the case of Bach’s partitas, he wrote three of them for violin and six for harpsichord; on the present recording young French classical pianist David Fray plays two of the harpsichord partitas on the piano.

First, what you have to understand about Bach’s partitas is that he wrote them, in his words, “to refresh the spirits of music-lovers.” Although Bach modeled them in part on the then-popular French dance suite, he departed from the format in sometimes writing music for them that had nothing to do with dancing. Instead, we get six or seven highly original, often highly ornamented movements in each partita, sometimes lyrical, sometimes whimsical, sometimes bright and cheerful, sometimes moody and melancholy.

Second, you have to understand that Fray’s playing is equal parts brilliant, virtuosic, traditional, playful, and eccentric. Critics have compared him in this regard to the Canadian pianist Glenn Gould, with whom Fray shares many characteristics, including a love of Bach and a penchant for showmanship.

Anyway, the program begins with the Partita No. 2 in C minor, BWV 826. It comprises six movements: A Sinfonia, Allemande, Courante, Sarabande, Rondeau, and Capriccio. Fray attacks them with vigor and enthusiasm, yet communicates much nuanced feeling as well. The pianist has said, “We shouldn’t be afraid of acknowledging the expressiveness of Bach’s music; it’s not as though the Romantics had a monopoly on expressivity.” Fray furnishes a performance that is lively and dazzling in the faster movements to complement a refreshingly poised demeanor in the slower sections. These are not gut-wrenchingly sentimental readings but thoughtfully considered ones. The Sarabande, for instance, comes off with a kind of serene introspection rather than just being another stately dance, while the Capriccio displays a sprightly, driving gait.

Next, we get the Toccata in C minor, BWV 911, which stands in stark contrast to the partitas around it. Whereas the partitas sound generally upbeat and refreshing as Bach said, the Toccata is much more weighty and dramatic. Thus, it offers an effective counterpoint to its companion works on the disc. Still, Fray doesn’t keep it melodramatic, preferring to present its opposing themes in a serious yet rhythmically dynamic manner. It’s a most pleasing result. 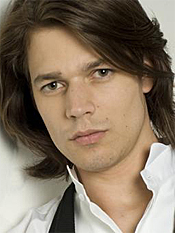 The program ends with the Partita No. 6 in E minor, BWV 830. It comprises seven movements: A Toccata, Allemande, Courante, Air, Sarabande, Tempo di Gavotta, and Gigue. Again, Fray jumps directly into the fray, so to speak. As he also says, “I try to make music like a conductor, not just as a pianist.... The piano constitutes a way of getting nearer the heart of the music. How do you balance the voices? How do you find a progression in a movement? How do you put the polyphony in place?” Certainly, he has found answers to these questions, as his interpretations are quite easily ones hard to forget.

Partita No. 6 is, indeed, the highlight of the set. The music sounds inspired, and Fray’s firm grasp of the music is evident in every note. Much of the work is moving in its sensitivity, and Fray’s approach to it is heartwarming, to be sure. The centerpiece is the Air, here a folklike dance that Fray pursues energetically, almost too much so. Yet one cannot help admiring and enjoying the infectious appeal of the presentation. This is not Bach for fogies.

Virgin did a good job recording the music at Notre-Dame du Liban, Paris, in 2012. A rather close-up piano provides ultimate detail. There is a beautiful glow provided by the lightly reverberant hall acoustic, which together with an excellent transient impact delivers a most-realistic piano sound. It’s one of those reach-out-and-touch-it affairs that seems as though the instrument is in the room with you.