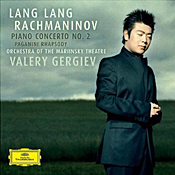 Yet another live recording. Ho-hum. I’m not sure why DG, EMI, and other major record companies have been so keen these past ten or more years on recording so many performances before a live audience, but it isn’t helping the sonics of the recordings any. I suppose it’s a matter of economics, in essence the audience helping subsidize the cost of the production. Well, at least DG spare us any applause here.

Popular virtuoso pianist Lang Lang shows a mature if largely lackluster approach to Rachmaninov’s Second Piano Concerto, appropriately focusing his attention on the work’s long sigh of a second movement rather than on the portentous introduction or the somewhat romanticized finale. Still, Lang Lang’s clearly conservative approach to the score tends to diminish some of the work’s appeal. 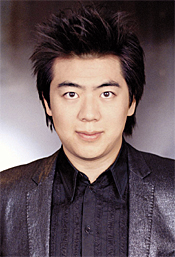 Fortunately, the pianist more amply displays his virtuoso technique in the Rhapsody on a Theme of Paganini, where his fingers dazzle and the keyboard lights up, if sometimes in a fairly heavy-handed, even wayward, fashion. The biggest “however,” though, is that I don’t believe these performances match any of the over half a dozen classic interpretations I had on hand from Janis, Rubinstein, Cliburn, Ashkenazy, Argerich, Wild, Horowitz, and others, despite how skillful Lang Lang may appear. Needless to say, the eighteenth Paganini variation, the Andante Cantabile, still sounds ravishing, no matter who’s playing it.

Still, there is that nagging issue of the sonics because the live recording never seems to come to life. It’s more than a bit soft and vague, the instruments often seeming too recessed compared to the piano, which, miked closely, sometimes looms in the foreground twenty feet wide. Nor is the perception of depth too impressive. Fortunately, the dynamics and bass are OK, if not quite as solid as I’d like. A quick listen to Rubinstein doing the Paganini Variations close to fifty years earlier on an RCA Living Stereo disc makes one wonder just how far we’ve advanced in sound recording, if at all.