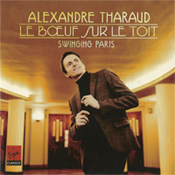 French pianist Alexandre Tharaud tells us that he has had an interest since childhood in the pop and jazz music of the 1920’s, especially the music played in the famous Parisian nightspot Le Boeuf sur le Toit. I also suspect that the popularity of Woody Allen’s 2011 motion picture Midnight in Paris, in which his main character goes back in time to the Paris of the Twenties, may have also influenced Tharaud’s decision to record the two-dozen or more tunes he does on the present CD. Whatever the genesis of the album may be, it’s a delight from start to finish, with Tharaud supported on several of the tracks by David Chevallier, banjo, and Florent Jodelet, percussions. What’s more, pianist Frank Braley, and singers Madeleine Peyroux, Juliette, Natalie Dessay, Behabar, Guillaume Gallienne, and Jean Delescluse join Tharaud on a select few songs. It’s hard not to like this music.

As Tharaud explains it, the cabaret-bar Le Boeuf Sur le Toit was a meeting place not only for Parisian musicians and composers of the 1920’s but for international musicians as well. As Tharaud explains it, “Every evening you would come across composers like Maurice Ravel, Erik Satie and the members of Les Six...even Stravinsky! There were French popular singers like Maurice Chevalier, Yvonne Georges, Kiki de Montparnasse and then, among the throng, lots of artists, such as Man Ray, Diaghilev, Coco Chanel, Georges Simenon. Though they came from different worlds, everybody on the Paris scene came to Le Boeuf Sur le Toit for jazz and new music amidst the excitement of the Roaring Twenties.” 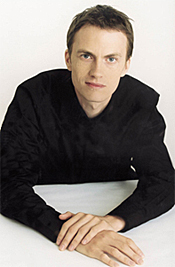 The program opens with Tharaud playing a solo arrangement of Chopinata, a jazzy collage of Chopin tunes put together by one of Tharaud’s piano heroes of the Twenties, Clement Doucet. Tharaud follows that with a number of piano arrangements by George Gershwin, Cole Porter, Nacio Herb Brown, Al Lewis, W.C. Handy, and the like.

But it’s not all purely jazz and pop. Tharaud intersperses pieces by classical composers affected by jazz: Maurice Ravel, Darius Milhaud, the aforementioned Chopin, and a really enterprising fox trot by Doucet based on themes by Franz Liszt.

Tharaud plays with verve and conviction, clearly reveling in a love for the music and finding the soul in it. He never tries to embellish it or hype it; he simply feels it, gently and delicately, and lets it flow lovingly from his piano. Moreover, his occasional guests make their own unique, wholly appropriate contributions, adding to the authentic feel of the music and songs.

A penultimate arrangement of Handy’s St. Louis Blues for harpsichord is fascinating, the entire show offering up high good fun.

Virgin Classics recorded the music in early 2012 at three locations: Ircam, Cite de la Musique, and Salle Colonne, all in Paris, France. The sound is warm and inviting, with a smooth vibrancy and a laudable clarity. One can almost picture the performers in a bustling cabaret, the imaging is that precise. There is also a strong dynamic impact and a rich acoustic resonance to help produce an overall lifelike response.