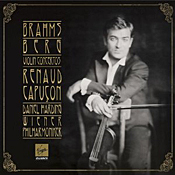 The German composer Johannes Brahms (1833-1897) wrote his only violin concerto, the Violin Concerto in D major, Op. 77, in 1878. He wrote it around the same time he wrote his Second Symphony (1877), and they both display a kind of pastoral or bucolic atmosphere. However, it is the slightly later Violin Concerto that is a little more robust and rugged, yet more lofty and aristocratic, almost as rustic as it is rhapsodic, making it something of an opposition of charms.

As Brahms grew up in a period where classicism was giving way to full-blown Romanticism, he sometimes found himself caught between the two competing styles, and we hear this in the Violin Concerto, nicely rendered by French violinist Renaud Capucon, with Daniel Harding and the peerless Vienna Philharmonic in sympathetic support.

Maestro Harding gives Brahms’s orchestral introduction an appropriately long, grand sweep. Then, when Capucon’s violin enters, it continues the Romantic inflection both in its delicate flow and in its bracing individualism. Capucon executes the familiar main theme most lyrically, with a polished, lilting finesse. The soloist and the conductor appear to want to point up the work’s symphonic structure more than usual, which tends to make it all the more grand and imposing. Adding to the gravitas of the occasion, Capucon delivers a sweet yet firm tone that never lingers long on the more sentimental aspects of the score.

The entry of the violin into the central Adagio takes so long it almost makes us forget this is a concerto. However, when Capucon does begin his stint in the lead, he makes the most of Brahms’s poetic writing and provides practically a chamber-style rendering of the music.

All of the players attack the finale with gusto and end the piece in high spirits. I particularly enjoyed the uninhibited brio and vigor Capucon and Harding bring to the music, keeping it cheery and serious at the same time.

The coupling on the disc is the Berg Violin Concerto, written in the last year of his life by twentieth-century Austrian composer Alban Berg (1885-1935). The two works, separated by over five decades, make an interesting comparison and contrast, Brahms still rooting around in the past, Berg clearly looking ahead to the future. 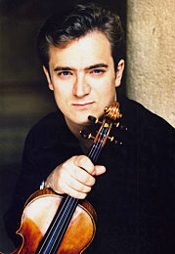 In an altogether different musical world from Brahms, Berg worked within a strict twelve-tone structure. Yet possibly because the untimely death of a dear friend--Manon Gropius, the daughter of Alma Mahler--inspired him to write it, Berg’s music is quite serene, harmonious, and accessible. Capucon and his fellow musicians allow the practically endless stream of melodies to glide forward in a delightfully graceful rendition of the score. All told, this makes a welcome companion piece to the Brahms.

Made by Virgin in 2011 at the ORF RadioKulturhaus, Vienna, Austria, the recording sounds refined and lifelike, enhanced by a lightly resonant acoustic. It’s also rich, smooth, dynamic, and warmly persuasive. The aural picture has a weight commensurate with the music, especially in the Brahms, and a clarity that becomes the Berg. Moreover, the Virgin engineers balance the violin with the rest of the orchestra impeccably, so while the soloist is still front and center, he never overpowers the accompaniment. As important, the violin exhibits a realistically detailed response, neither too bright nor too soft. Enjoyable music and enjoyable sound equal a winning combination.