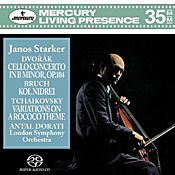 I’ve always thought of Janos Starker’s interpretation of Dvorak’s Cello Concerto on Mercury as typically masculine. Certainly, other men have essayed the work with equal poise and distinction from Gendron (HDTT) to Wallfisch (Chandos) to Rostropovich (DG) to Ma (Sony), but none of them seem to me to convey the same strength, the same virile character as Starker does. Starker’s version is a remarkable performance, indeed, although (to be punny) it may strike some listeners as a little too stark.

The real downside, you see, is that Starker gives up something in warmth and humanity--sensitivity, if you will--in his interpretation. He plays the piece with a clinical precision that rather overshadows the work’s romanticism, especially in the slow movement. Still, for the outright vigor of the piece, I have always favored Starker above everyone else. 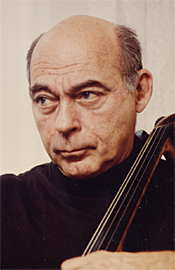 But maybe I’m also just comparing sound quality here. For years I owned the 1962 Mercury recording on vinyl; then in the Seventies I bought it on a special Japanese audiophile LP; and in the early nineties I welcomed the Mercury Living Presence CD issue, remastered by the original producer, Wilma Cozart. This current SACD hybrid preserves Cozart’s CD mix (a new transfer of the old master) and adds a new three-channel rendition as well, if you have the player and speakers to accommodate it. In two-channel stereo, as I listened, it sounds as sharply delineated as ever, perhaps even clearer in the new SACD mode, with a wide, well-balanced stereo spread, and a cello that appears to be in the very room with the listener.

No other recording of the work sounds as natural or as impressive as this one, although the Gendron from HDTT comes close. Couple the Cello Concerto to a lovely reading of Max Bruch’s Kol Nidrei and a less-interesting but still well recorded version of Tchaikovsky’s Variations on a Rococo Theme, and you get a splendid album. If you don’t already own the CD, I suggest you at least give a listen to this SACD.