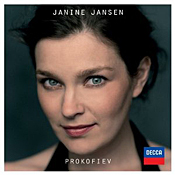 It’s always a pleasure welcoming another recording from violinist Janine Jansen, who never fails to provide a stimulating, energetic, compassionate, yet wholly traditional performance of whatever she’s performing. Here, she plays the Prokofiev Second Violin Concerto along with two of Prokofiev’s violin sonatas. They make attractive music.

Russian composer Sergei Prokofiev (1891-1953) wrote his Violin Concerto No. 2 in G minor, Op. 63, in 1935, just before he returned from a self-imposed exile from Russia and while turning to what he called a “new simplicity” in his music. The Concerto starts with a lonely violin solo that gets only a little bit hectic before settling down to a more modest, plaintive tone. Prokofiev was obviously softening his earlier dissonant style and relying more on melody, perhaps to appease the ultraconservative Russian musical censors of the day, who seemed to appreciate his new attitude.

Ms. Jansen begins by playing the Allegro moderato sweetly, with only a tinge of melancholy in a beautifully lyrical performance. Although it perhaps lacks something of the urgency of Heifetz’s old RCA recording, it makes up for it in its soaring lines and delicate nuances. Ms. Jansen’s interpretation emphasizes the beauty and poetry of the piece yet doesn’t overlook its strength. Incidentally, she plays a 1727 “Barrere” violin by Stradivari, and I can’t imagine its sounding any better in the past 200-odd years. 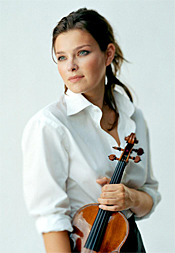 Following the opening movement, we find an Andante assai, with gently lilting melodies above a rhythmic arpeggio accompaniment and never sounding lovelier. Finally, Prokofiev closes the show with a pulsating, waltz-like finale featuring ever more-pronounced percussion elements overtaking the Gypsy swirls of the violin. Ms. Jansen gives the instrument a workout as the music comes to a sudden, climactic halt.

Regarding the two accompanying pieces, Prokofiev wrote the Sonata for 2 violins in C major, Op. 58, at about the same time as the Second Violin Concerto, and it displays a similar simplicity, which Ms. Jansen exploits nicely. The Sonata for violin and piano in F minor, Op. 80 no. 1, however, is much darker, a memorial for colleagues who disappeared under Stalin’s regime. It stands in stark contrast to the relatively unadorned grace and directness of the other two works, and again Ms. Jansen handles it appropriately, adding a touching solemnity to the occasion.

Decca recorded the Concerto at Henry Wood Hall, London, and the two Sonatas in Teldex Studio, Berlin, in 2012. The sound throughout comes up nicely defined, if just a touch hard. In the Concerto the engineers recorded the violin fairly closely for maximum detail, but the orchestra offers a good sense of depth. There is also a strong, deep bass response when needed, as well as quick transients, especially noticeable in the Concerto’s final movement. The recordings of all three works are clear and firm in the best Decca tradition.