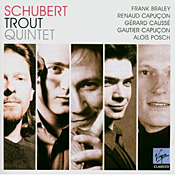 Can there ever be too many recordings of Franz Schubert’s most felicitous work, the “Trout” Quintet? Not when they are as exuberant, as intoxicating, as joyful as the one presented here by pianist Frank Braley, violinist Renard Capucon, violist Gerard Causse, cellist Gautier Capucon, and double-bassist Alois Posch.

Schubert wrote this little gem while vacationing in the town of Steyr in the north of Austria, a town he loved. But he apparently only wrote it for his own and his friends’ amusement because he never published it, and no one ever performed it in public in his lifetime. Still, it has proved enduring, and practically every chamber group in the world has since played and recorded it.

The present recording finds five people performing it who have played it together many times before. Yet unlike so many of the fine, mature recordings of the piece by artists like Brendel, Curzon, Richter, Ax, and the like, it’s a delight to hear what is so consciously a youthful performance by five relatively young, albeit rather well-known, European artists. After all, Schubert wrote it when he was only in his early twenties himself and at a happy time in his life. One might expect as much from its performance. 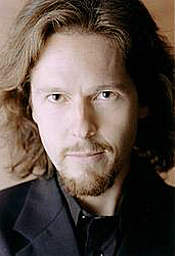 Almost every movement shows a vigor and cheerfulness that is hard to resist, although, curiously, the final movement, marked “Allegro giusto,” is hardly that. It’s only here that the quintet of players slow down, catch their breath so to speak, and end on a relaxed, though still cheerful note. The easy knock against the performance might be that it’s too glib, too superficial, and that’s true; however, we have to remember that the “Trout” is mostly surface glitz, anyway. If you want profound, try Brendel.

Accompanying the “Trout” is a set of variations on the song “Trockne Blumen” from the composer’s song cycle Die schone Mullerin. Schubert wrote it just a few years before his early death, and it contains more than a passing note of melancholy. The disc concludes with the very brief, very simple, and very beautiful quintet arrangement of “Litanei auf das Fest aller Seelen,” another song setting of a poem, this one “celebrating the peace of the soul,” as described by Adelaide de Place in the disc’s informational booklet. It has a delicately expressive “Ave Maria” feel to it, and it’s a shame it lasts less than two minutes.

While the sound is not too spectacular and oddly seems to favor the left side of the stage, it is quiet and well balanced. All in all, I enjoyed this version of the “Trout” when I first heard it, and it continues to please, even if it is not at the top of the pile.