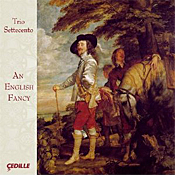 Could they do it again? An English Fancy is Trio Settecento’s fourth  traversal of early European music. The Trio--Rachel Barton Pine, violin, John Mark Rozendaal, viola da gamba, and David Schrader, harpsichord and positiv organ--already gave us three excellent albums of Baroque works--An Italian Sojourn, A German Bouquet, and A French Soiree--that were delights (although they claim this album is their last in this particular series). Could they do equally well with these sixteenth and seventeenth-century English pieces?

As usual, the Trio play the music on instruments of the era, meaning that Ms. Pine had to forsake her usual Baroque violin for a replica of a Renaissance one, which turned out, as she admits, to be harder to master than she thought. She writes in a booklet note, “The neck and fingerboard are shorter, the bass bar and sound post are thinner, and all four strings are made of raw gut. Needless to say, the Renaissance violin has a special voice, easily distinguishable from its successors.” That it does, and it is its “special voice” that helps make this album such a pleasure.

Highlights? Let me name a few: The opening number, Byrd’s Sellinger’s Rownde, has a nice ebb and flow to it, with each musician getting a moment in the spotlight. The second item couldn’t be more different, a mournful dirge by Hume called Captain Hume’s Lamentation in which the viola da gamba provides a melancholy underpinning. The positiv organ introduces and holds sway in the Suite No. 8 in D Major by Lawes, a three-movement work odd in nature that comes across with a fascinating beauty.

And so it goes. There’s another suite that follows, again a three-movement affair, the Suite No. 2 in G Minor by Jenkins, that casts a sorrowful air, yet it’s played with such affection and the whole thing is so melodic that one hardly notices its dances are rather solemn. The longest piece on the program, a selection of seven movements from the Suites in G Minor and G Major, “The Little Consort,” by Simpson brims over with stately, courtly, sometimes rustic tunes.

Probably my favorite work on the disc, though, is a series of variations titled “John Come Kiss Me Now” by Baltzer that has a wonderfully infectious folklike swing to it. The music must also have been a devil for Ms. Pine to play with all the multi-stopping, particularly played on a Renaissance violin. 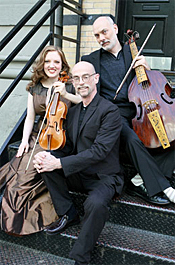 Seven selections from Purcell close the show, and listeners might recognize them most easily of all of the music on the disc thanks to the popularity of the composer’s stage works and his familiar style. Combining English, French, and Italian forms, the Purcell selections are fun throughout, and Trio Settecento play them with a casual ease that is most welcome.

An interesting booklet note, by the way, tells us that “string players of the period were instructed to tune their highest strings as high (i.e., as tight) as possible without breaking. This high tension produces a quick response and brilliant sound ideal for the quickly running and leaping passage work found in this repertoire.” Thus, Trio Settecento use a high pitch level to help reproduce the musical practice of the day.

Cedille’s chief engineer Bill Maylone recorded the music in Nichols Concert Hall at the Music Institute of Chicago, Evanston, Illinois, in 2011. I tell you, if Maylone did the audio, I’m behind it all the way; he does some of the best work in the business. The balance among the instruments is as ideal as one could want, with none of them overshadowing the others, although, to be fair, the violin is almost always dominant. Moreover, there is a wonderfully agreeable ambient glow around the notes, a natural-sounding hall resonance that enhances the music and our listening pleasure. Midrange detail is excellent; dynamics are fine; and a moderately distanced miking arrangement gives the whole affair a feeling of realism.

Cedille fill the disc to capacity with 79:47 minutes of music. You get your money’s worth here, along with a lovely album cover.