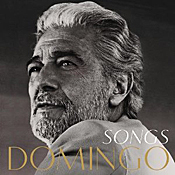 Spanish tenor and conductor Placido Domingo (b. 1941) has been making beautiful music since his stage debut in 1959, undertaking over 140 operatic roles, leading any number of orchestras, and recording over 100 albums. The present disc, Songs, is his first pop album in over twenty years.

Looking more and more like “The Most Interesting Man in the World,” Domingo may well be the greatest singer in the world. Heck, he may be the greatest singer of all time; his fans will no doubt agree, and it’s hard to argue against the point. This time out he sings fourteen pop numbers, all favorites of his, on eight of them accompanied by other noteworthy artists: singers Josh Groban, Harry Connick Jr., Zaz, Katherine Jenkins, Susan Boyle, Placido Domingo Jr., actress and singer Megan Hilty, and trumpeter Chris Botti.

Domingo opens the show with “Cancion para una reina,” a love song of exquisite beauty, which the singer caresses with subtle care. Next, we hear “Sous le ciel de Paris” in a duet with Josh Grobin; it’s lighter and a tad more upbeat than the first tune, the two men’s voices blending wonderfully but Domingo’s clearly the more powerful.

“Time After Time” features Domingo with Harry Connick Jr., and it has a breezy Sinatra-like style to it. Although Domingo and Connick have about as different voices as you can imagine, they make it work by approaching it in a casual, easygoing manner. 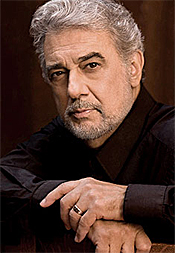 And so it goes. Among my favorite songs are the aforementioned “Cancion”; then “Come What May,” a duet with Katherine Jenkins; a meltingly affecting “Parla piu piano” from The Godfather; “My Heart Will Go On,” from Titanic, with Megan Hilty; “Eternally,” Chaplin’s song from Limelight; “Jalaousie,” possibly the most famous tango ever written; and a touching duet with Domingo and his son on “What a Wonderful World.”

You can usually sense Domingo holding back somewhat in his duets so as not to steamroll his singing partner. Now in his seventies, he’s still got the strong, mellifluous voice; the impeccable inflections; the emotional range and power; and the pure communications skills of a great vocal artist. He may go on forever; one can only hope.

Sony recorded the songs in 2011 and 2012 at various locations including Avatar Studios, New York City, U.S.A.; Abbey Road Studio 1, London, England; Studio Millenia, Valencia, Spain; CATA Studios, Madrid, Spain; and 71 Recording Studios, Zurich, Switzerland. So, it’s an international project. The sonics are typical of most pop recordings: The vocals are front and center, the orchestra spread out behind very widely but without much depth, transparency, or air. Nevertheless, it’s the voices that count, and they are firm and forceful, with no audible imbalances in the response. There are, incidentally, some nice percussive sounds on “Come What May.”

Email ThisBlogThis!Share to TwitterShare to FacebookShare to Pinterest
Labels: Domingo