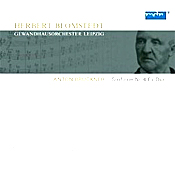 My reasons for wanting to hear this recording go beyond the music, although certainly that was a prime motivation, Bruckner’s Fourth Symphony being one of the most-popular pieces of late nineteenth-century music ever written. No, it was also because of the great Gewandhaus Orchestra, one of the oldest ensembles in Europe, tracing its origins back to the mid 1700’s; and because of its conductor, Herbert Blomstedt, who was not only the Gewandhaus’s principal conductor from 1998-2005 and is currently one of its Conductors Laureate, but had been the conductor of the San Francisco Symphony for many years, where I enjoyed hearing him in person on many occasions. Then, there was also the fact that Blomstedt had recorded the Bruckner Fourth at least twice before, with the Dresden Staatskapelle and the S.F. Symphony, and I had liked them both.

The Austrian composer Anton Bruckner (1824-1896) premiered his Symphony No. 4 in E flat major, “Romantic” in 1881, and it would be his first really successful big-scale work. Still, it didn’t come easy. The public had greeted his first three symphonies with a tepid response, and it took Bruckner over half a dozen years to write and revise the Fourth. Fortunately, when he did finally premiere it, the public loved it, just as audiences have loved it ever since. Bruckner himself nicknamed it “Romantic,” and it became his only program symphony. His final revision came in 1886, the Nowak edition, which Blomstedt plays here. The composer tells us what each movement represents, from knights riding out of a medieval castle through the mists of dawn to the sounds of the forest and birds, to a funeral, then a hunt, complete with horn calls, and a brilliant culminating summation. The symphony easily communicates a grandeur and nobility of human spirit, since Bruckner was, above all, a profoundly pious man, his music clearly illustrating his spirituality.

In the first movement, Blomstedt sounds sweetly smooth and flowing throughout the lyrical passages, with more good cheer than we normally hear and not quite the gravitas. However, it also seems to lack some of the energy we hear from conductors like Klemperer (EMI), Boehm (Decca), Jochum (DG or EMI), Wand (RCA), or Blomstedt himself (Denon and Decca). 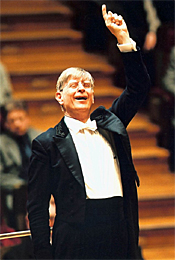 After giving us a disappointing second-movement Andante, more lackluster than elegiac, Blomstedt provides a nicely vigorous Scherzo, which Bruckner teasingly called “a rabbit hunt,” building a proper momentum as it progresses.

Then we get that big Finale that has always seemed to me to go too long and which Blomstedt doesn’t help by trying to make sound even grander and more somber than we usually hear it. Still, the architecture is strong, even if the conducting appears a tad listless. My advice: If you like Blomstedt’s conducting, stick to either of his two earlier renditions of the Bruckner Fourth.

The sound of this live, 2010 concert recording, made in stereo and multichannel and presented on a hybrid SACD, comes complete with audience noise, particularly between movements and an ending applause. I mean, what more could we ask for? Well, perhaps more transparency, for one. Although the dynamic range is very wide and orchestral depth is more than adequate, especially in the SACD mode, the midrange is a touch forward and edgy in the upper midrange and a tad veiled in the center. Worse, the recording doesn’t offer the bass response or the weight the music needs. Instead, we get a somewhat cavernous effect with an oddly narrow stereo spread and a slightly bright but dull overall response. Certainly, in the recordings I’ve heard of the Gewandhaus Orchestra, mostly on Philips, it sounds characteristically dark and burnished, but I’ve never heard it as varied in its response as here. As the disc is a hybrid affair, you can play it in CD stereo on any regular CD player or in SACD stereo as I did or in SACD multichannel surround. I’m not sure how much improvement the surround sound would offer the live recording, perhaps a bit more ambient noise enhancement.