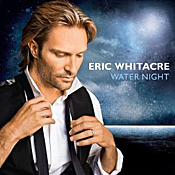 Eric Whitacre (b. 1970) is an American composer, conductor, and lecturer who has enjoyed a remarkable spike in popularity these past seven or eight years, thanks in large part to several best-selling record albums of his mostly choral music, like his Light & Gold CD from 2010, and to his "Virtual Choir" projects on YouTube. In 2010 he signed a long-term record contract with Decca, the present disc his second release for the company.

You may have heard the aforementioned, GRAMMY-winning album Light & Gold. This one, Water Night, from 2012 is in much the same crossover-classical vein, the music sung and played by various groups including his own Eric Whitacre Singers and the London Symphony Orchestra, with a couple of well-known soloists thrown in and occasional Latin texts, which Whitacre, a student of the Juilliard School, seems to enjoy. I have no doubt that Water Night will enjoy the same kind of success that Light & Gold did, and it certainly deserves attention.

The question we have to ask, though, is, Why? Why does Whitacre get all the praise, glory, adulation, and profit that probably a thousand other talented classical composers don't get? I would propose several reasons: First, Whitacre strikes a central chord in listeners' hearts; his music is spiritually uplifting in the manner of Arvo Part's, with inspiring messages of hope and salvation for everyone. Second, Whitacre seems to be an old-fashioned Romantic at heart, his music sweet, amiable, and elegant; the tone tranquil; the tempos calm and soothing; the style straightforward, sometimes sentimental; the voices uniformly reassuring. Who wouldn't respond to that? Third, he has attracted some of the biggest and best names in the business to perform and promote his music, in this case the Decca record label, the LSO, soprano Hila Plitmann, and cellist Julian Lloyd Webber. Then, fourth, there is the man's pure sex appeal. OK, maybe you weren't expecting that one. But it's true. Just as record companies favor beautiful, young, female musicians who are not only talented but make attractive cover art, so does Whitacre himself ooze sex appeal. Just glance at his pictures: He's relatively young, with the rugged good looks of a movie star, trendy long hair, and a stubble beard so chic these days. He could have stepped off the front page of any voguish men's fashion magazine. So, yeah, he's got it all, and I'm sure he's deserving of every bit of it.

OK, I think we've established that Whitacre writes beautiful music. Can we truly call it "classical"? Of course, we can, and, besides, it doesn't matter how much it crosses over into pop. Music is music, and if you enjoy it, who cares what you call it. Will any of Whitacre's music become "classic," that is, lasting? That we won't know for forty or fifty years. Right now, I'd call his material pleasurable but not necessarily memorable. I can appreciate it while I'm listening to it, but I doubt I could whistle any of it five minutes from now. We'll have to wait and see on the "classic" end.

The program begins with what is one of the best numbers on the program, "Alleluia" ("Praise the Lord") sung by the Eric Whitacre Singers. The composer says in a booklet note that he's neither an atheist nor a Christian, but he finds this particular liturgical word enchanting. Although the hymn is little more than the repetition of the word "Alleluia," it conveys a wealth of feeling.

"Equus," with the LSO, one of the only purely orchestral tracks in the album, is an example of what Whitacre calls "dynamic minimalism." However, it is far more than that and sounds at times as though John Williams had written it for a Spielberg epic. 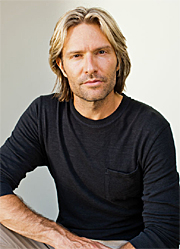 Another favorite among the nine selections is "The River Cam," with cello and string accompaniment. It is a piece of music in the British "pastoral" school, reminiscent of Arnold Bax, Frederick Delius, Frank Bridge, or Ralph Vaughan Williams. It's quite lovely, and, for me, the best piece of pure "classical" music on the disc. I hope this one has a real lasting power.

The title tune, "Water Night," is one we heard on the Light & Gold album in choral form. Here, the LSO strings perform an orchestral version that I found even more affecting. Again, it follows a lightly meandering pastoral course, inspired by the poetry of Octavio Paz.

Then, Whitacre set some of the words from author Margaret Wise Brown's "Goodnight Moon" to music, here sung by Whitacre's wife, soprano Hila Plitmann with an accompaniment from the LSO. It's a charming lullaby and can almost bring tears to one's eyes.

And so it goes.

Recorded at St. Albans the Martyr Church, Holborn, London, and Henry Wood Hall, London, the sound is uniformly smooth and expansive, with an enormous dynamic range and solid impact. You won't find a lot of depth or air in the presentation, nor will you probably care. There are too many other things going on, like the superwide stereo spread and the extended frequency response. In other words, it is sound that matches and complements the music.

Email ThisBlogThis!Share to TwitterShare to FacebookShare to Pinterest
Labels: Whitacre