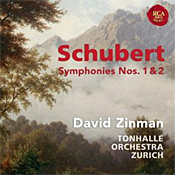 Maestro David Zinman and his Tonhalle Orchestra Zurich continue their recorded cycle of Schubert symphonies with Nos. 1 and 2, which they released concurrently with No. 7 (8) “Unfinished.” As we would expect from this source, the performances and sound quality are quite good, and the disc makes a welcome addition to the catalogue.

The “however” is one of personal taste: I have never considered Schubert’s first two symphonies as anything particularly extraordinary. The composer wrote them while in his teens, and they lack some of the wit, charm, bounce, bubble, and inventiveness that mark his later symphonies. The major appeals of the present recording may be for collectors wanting some of the best available performances of Nos. 1 and 2 just for the sake of having them, whether they like them or not, and, of course, for those completests wishing to collect Zinman’s entire set. Still, the way Zinman plays the two works, one has a renewed respect for them.

Austrian Franz Schubert (1897-1828) was a prolific composer, writing nearly 1,000 pieces of music in his brief lifetime, primarily songs, yet he failed to publish many if not most of them and failed to gain the attention of the public at large. Given the number of truly great compositions he left us, it seems a shame he didn’t get the credit he deserved while he lived, but such is life. It is sometimes unfair. We live with it and, meanwhile, enjoy the music.

Schubert wrote his Symphony No. 1 in D major, D 82, in 1813, opening it with a grand statement in the Beethoven vein that, nevertheless, doesn’t seem on the face of it very remarkable. However, Zinman does bring out its life, its vitality, maybe its impetuous youthfulness. Moreover, there is an easy flow to the music, the rhythms dancing smoothly under the conductor’s direction. If the first movement is Beethovenian in character, the second is most definitely Mozartian, and Zinman approaches it with a light touch. The Minuetto and finale that follow are more dance-like than the preceding movements, and Zinman is careful to link these qualities to the composer’s later work.

The Symphony No. 2 in B-flat major, D 125, Schubert wrote a year later, 1814, and it is longer and more ambitious than the First. Again, we get a slow introduction, followed by an agitated development section and a repeated theme. Zinman gives it plenty of spark, and the music comes across with an exuberant joy. The Andante finds Schubert playing with a set of variations, the theme again reminiscent of Mozart. Then, in a sudden burst of energy, we get a scherzo-like third-movement Minuetto and then a Presto Vivace in which Zinman with his zesty interpretation finds and delivers great delight. 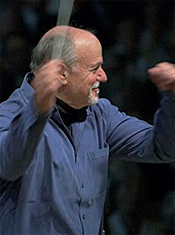 So, even though I don’t see these symphonies as anything special from Schubert, Zinman almost makes one a believer. There may be more here than I thought.

RCA recorded the music in February and March of 2011 in Tonhalle Zurich, Switzerland, to generally good effect. It exhibits fine overall imaging, depth of image, dynamics, and impact. The midrange sounds reasonably transparent, with a more-than-adequate separation of instruments. In all, the sonic image is open, airy, and slightly reverberant, creating a lifelike aural experience.

Heretofore (does anybody in the real world actually say “heretofore”? I dunno, but I like it). Heretofore, my favorite recording of these works was by Claudio Abbado and the Chamber Orchestra of Europe (DG). And before that in the long ago, it was an ancient LP by Sir Thomas Beecham, mono and not very good sounding but still probably a benchmark in the works (although I don’t have it any longer to compare). After hearing Zinman, though, I think his reading is marginally sunnier, cheerier, and more penetrating than Abbado’s and RCA’s sound a touch cleaner. While it’s close, I’d say Zinman is now the man of the hour. I even like RCA’s artwork for the package.

If the RCA disc has any minor drawback, it’s the same as Zinman’s disc of the Seventh “Unfinished”:  It’s rather short on content. The two symphonies take up well under an hour of playing time. As I
say, a minor concern.