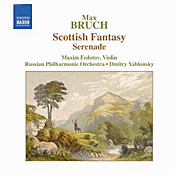 Like so many other composers, writers, and performers, Max Bruch (1838-1920) became mildly annoyed that people remembered him almost exclusively for one thing, in his case the violin concertos, and in particular the First Concerto. He did, after all, write hundreds of other works in a career that spanned over fifty years. But looked at in another light, I suppose it's better that people remember somebody well for one important thing than that they never remember the person at all.

Anyway, this Naxos disc aims to rectify the situation somewhat by presenting another famous piece by Bruch, the Scottish Fantasy from 1880, alongside a lesser-known work, the Serenade from 1900. The Fantasy is, of course, Bruch's compendium of Scottish folk tunes, over thirty minutes' worth, tied loosely together in five movements. Violinist Maxim Fedotov joins Maestro Dmitry Yablonsky and the Russian Philharmonic Orchestra in presenting both pieces.

Things begin rather oddly in the Scottish Fantasy with an introduction marked "Grave," which is exactly how violinist Maxim Fedotov plays it, literally. It's slow and solemn to the nth degree before giving way to the more familiar and frolicsome melodies that follow. However, Fedotov never really seems to let his hair down in this music, taking it all a tad more seriously than what some listeners may have in mind. Admittedly, I've become accustomed to the performances of Itzhak Perlman (EMI) and Jascha Heifetz (RCA), both of which are more joyous and outgoing than Fedotov, whose reading is somewhat more restrained and genteel. 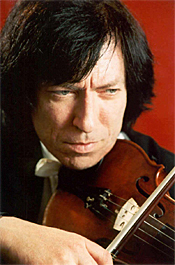 It seems to me that Fedotov's approach to Bruch sounds better suited to the Serenade than to the Scottish Fantasy. The composer apparently first proposed the Serenade as a fourth violin concerto, which obviously never came off. Instead, we get a lyrical (yet long, almost forty minutes) set of generally Romantic themes, none of them easy to remember two minutes after hearing them. The work does not appear to have gone over too well with the public in 1900, incidentally, a public that was already finding music such as Bruch's rather old-fashioned compared to the emerging impressionism, expressionism, and such. Yet in Fedotov's hands the Serenade has a soothing lilt, even in the livelier sections. It may be entirely forgettable material, but it passes a pleasant time while it's playing.

Naxos's sound is in the big, warm category here, not revealing a lot of inner detail but most comforting to the soul after the stress of the day. For the record, so to speak, the Previn (his earlier one) is the best sounding of the three recordings of the Scottish Fantasy I had on hand, and the Heifetz is the thinnest and brightest. Still, nothing is so simple, because the Heifetz is also my favorite interpretation of the three. Oh, well....

Email ThisBlogThis!Share to TwitterShare to FacebookShare to Pinterest
Labels: Bruch