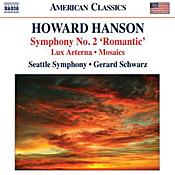 If you’ve seen Ridley Scott’s 1979 sci-fi/horror movie Alien, you’ve heard a part of Howard Hanson’s Second Symphony, or if you have any Mercury LP’s or CD’s, you might have heard Hanson conducting any number of recordings he made in the Fifties and Sixties. Hanson (1896-1981) was a Pulitzer Prize-winning American composer, conductor, teacher, and musicologist who gave the world quite few good musical compositions as well as an equal number of good audiophile recordings. On the present disc, we hear his Symphony No. 2 “Romantic” and several shorter works, Lux Aeterna and Mosaics, all recorded by Maestro Gerard Schwarz and his Seattle Symphony in 1988, 1992, and 1994 for the Delos label and re-released by Naxos in 2011. Schwarz’s disc makes an excellent alternative to Hanson’s own recording of the Second Symphony for Mercury.

Hanson wrote the Symphony No. 2 in D-flat major, Opus 30, in 1930, with the subtitle “Romantic.” The subtitle is entirely appropriate as the work sounds much like a continuation of late nineteenth-century Romanticism, with shades of his Romantic contemporaries Rachmaninov and Sibelius along the way. Hanson was something of an old-fashioned holdover in this regard, saying that his intent was to write music “young in spirit, lyrical and romantic in temperament”; with the Symphony No. 2 he obviously succeeded. Viewed today, it’s probably his most-famous, most-accessible work. It’s no wonder we hear bits and pieces of it throughout popular culture.

The introductory segment of this three-movement symphony begins with a grandly melodramatic sweep and then opens up to a beautifully melodic theme we’ll hear in various guises throughout the work. Schwarz takes particular delight in the more poetic aspects of the score, while giving full measure to its rhapsodic qualities. Although Hanson tended to throw quite a lot into the stew, Schwarz holds it all together without its becoming too sentimental. Alien lovers will, well, love it.

Hanson once said that he did “not believe that music is primarily a matter of the intellect, but rather a manifestation of the emotions.” The symphony’s Andante con tenerezza (“moderately slow, with tenderness”) reiterates some of the first movement’s thematic content, although in much altered form, with Schwarz taking more of his time with it than the composer did in his own recording.

The concluding Allegro con brio (“quick and lively, with vigor and vivacity”) starts with a flourish worthy of Hanson’s teacher Ottorino Respighi and The Pines of Rome before settling into its lush, rhapsodic closing material. Schwarz again emphasizes the recurring theme, this time on a more grandiloquent scale, closing the show in fine fashion. 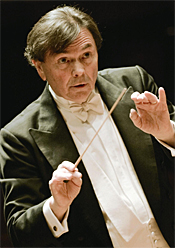 As companion works, Schwarz and company provide two of Hanson’s briefer pieces, first the Lux Aeterna (“Eternal Light”), from 1923. It was a common chant for a Requiem Mass and probably came about as a result of Hanson’s fascination for sixteenth-century Italian composer Giuseppe Palestrina and for Gregorian chant. It’s a rather somber, almost melancholic work, and Schwarz probably does more than anyone to make it seem more important and less pompous than it is. I admit it does exude a strangely calming effect.

The second filler, Mosaic (1957), is a later piece from Hanson, a brief set of variations in his usual brooding Nordic style. This is maybe Hanson at his most Sibelian, so take that as you will. Certainly, Schwarz does his best to bring out all the color and emotional intensity in the work.

Originally, it was Delos who recorded the sound, all three selections at the Seattle Opera House in 1988 (Symphony), 1992 (Mosaics), and 1994 (Lux Aeterna). The sound is quite expansive, stretching across the speakers and beyond, with a smooth response and a reasonable degree of depth besides. The midrange sounds a trifle thick, not as transparent in the Second as Hanson’s Mercury recording, which remains an audiophile choice, and there is just a hint of edge to the Seattle recording’s lower treble, evident in the strings from time to time. A strong dynamic thrust and a touch of ambient bloom complete a fairly lifelike acoustic picture.

Email ThisBlogThis!Share to TwitterShare to FacebookShare to Pinterest
Labels: Hanson