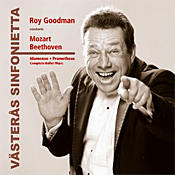 English conductor, singer, and violinist Roy Goodman has been a professional musician for over five decades, leading any number of well-known ensembles like the Brandenburg Consort, the Parlay of Instruments, the Hanover Band, the English Chamber Orchestra, and the European Union Baroque Orchestra. During this time, he’s made over 120 recordings and premiered over 40 contemporary works. But on the cover of the present album, Roy Goodman Conducts Mozart and Beethoven, he strikes a goofy pose worthy of Latin bandleader Xavier Cugat. Paint a little mustache on him and pretend he’s doing rumbas. Happily, there is nothing goofy about his performances of ballet tunes from Mozart’s Idomeneo and Beethoven’s Creatures of Prometheus.

The program begins with the little four-movement ballet sequence that closes Mozart’s Italian-language opera Idomeneo, which he premiered in 1781. Goodman produces a lively and buoyant opening Chaconne, followed by a lovely, flowing Larghetto. The conductor ensures that the transitions are seamless, so everything is of a piece. The next two segments Goodman takes at exhilarating speeds, though never hurried, offering up a conclusion both exciting and celebratory.

Beethoven’s dance music for The Creatures of Prometheus is much more extensive than that for the Mozart work, of course, Beethoven’s eighteen movements comprising a full ballet, starting with the familiar Overture. Again, Goodman gets the show started in invigorating fashion. Most of Mozart’s music here is pretty lightweight, to be sure, and without the actual dances as visual markers it’s not easy to follow the story. Fortunately, in Goodman’s hands you don’t need a story (and, yes, if you do need a narrative to follow, you can always read along from Goodman’s booklet notes). Goodman keeps the proceedings moving along at a healthy clip, maintaining the drama and the fantasy of the music neatly tied together. It’s all quite delightful, really.

Goodman does suggest in his notes that the music of Creatures may have marked a turning point in Beethoven’s output from the Classical period to Romanticism. And maybe that’s why Goodman presents it in so fluid, imaginative, and nonrestrictive a manner. As a final observation, if you recognize the theme in the last movement, it’s because the composer would use it in the finale of his Third Symphony a couple of years later. If you’re going to borrow, borrow from the best. 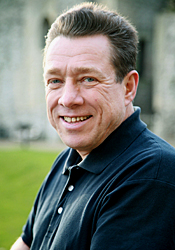 The engineers at dB Productions recorded the music on May 6-11, 2011, in the Vasteras Konserthus, Vasteras, Sweden. It sounds vibrant, with excellent midrange clarity and transient response. The Vasteras Sinfonietta is a chamber orchestra of just over thirty players, so the recording captures a fine intimacy. Although the sound is a tad thin in the bass and maybe a little forward at times in the lower strings, it is no cause for alarm because there is also a touch of hall resonance as compensation. The engineers miked the affair at a moderate distance, producing a slightly constricted stage width but rather good depth. With dynamics that are not particularly extraordinary but more than adequate, the result provides an enjoyably realistic listening experience, with a sense of you-are-there presence. The eighth-movement Allegro of The Creatures of Prometheus is especially useful in showing off the recording’s depth and transparency.

And why the goofy cover picture? Who knows. Maybe Goodman was up to being a little silly, or maybe he just wanted to get our attention. He did--with his exemplary performances.