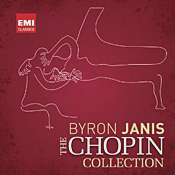 Although American pianist Byron Janis has recorded for several companies--including RCA, Mercury, and EMI--it is for his work with Mercury in the Fifties and Sixties that I personally know of his work. I have long been a fan of his Rachmaninov, Prokofiev, and Schumann recordings, but I seem to have lost track of him after his lifelong bout with arthritis flared up in the Seventies and he went into semiretirement. But in the mid Nineties he recorded these Chopin pieces for EMI, and he apparently has been working continuously ever since. This is all the remarkable considering that he celebrated his eighty-fifth birthday the year of this writing.

Anyway, what we have here is a collection of Chopin mazurkas, nocturnes, waltzes, and impromptus that Janis recorded in 1996 and 1999. EMI released most of them in the 1996 album Byron Janis Plays Chopin, now out of print; and in this 2012 rerelease the company adds several more pieces that Janis recorded a few years later after the pianist accidentally discovered two unknown versions of Chopin waltzes. Altogether, the eighteen selections on the disc provide a superb representation both of Chopin’s brilliance and Janis’s artistry.

My own favorite pianists in Chopin have long been Maurizio Pollini and Arthur Rubinstein, but after hearing Mr. Janis, a pupil of Vladimir Horowitz, I can easily see how one might change one’s allegiance. Janis’s smooth, easy, gentle, flowing style here belies his reputation for fierce drive and nervous tension. In Chopin, at least, the man remains relaxed yet completely in control. 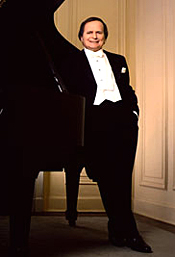 The program opens with the Mazurka No. 1 in G minor, Op. 24, which Janis plays at a moderate pace; no helter-skelter showmanship for its own sake here. He follows it with the Nocturne in E flat major No. 2, Op. 55, maintaining the same low-key manner as in the mazurka, allowing the music to float softly to our ears.

“Above all,” says Janis in a booklet note, “the essence of Chopin’s music was zal, the Polish word for ‘bittersweet.’ It expresses all of the tenderness and humility of regret borne with resignation. ... It was his way of depicting the tormented history of his beloved Poland.” And so it goes, on through the rest of the selections, each a delicately polished gem. My own favorite tracks, for what it’s worth? The Nocturne in B major No. 2, Op. 32; the Waltz in A minor No. 2, Op. 34; the Mazurka in B flat minor No. 4, Op. 24; the Nocturne in F sharp No. 2, Op. 15; the Nocturne in D flat major No. 2, Op. 27; and the two concluding Waltzes--G flat major No. 1, Op. 70, and E flat major, Op. 18 “Grande valse brilliante.” Lovers of Chopin’s music can hardly find better.

The piano sound is full and rich, the EMI engineers having well captured the instrument’s mellow, resonant tone. It’s not too close, either, and doesn’t stretch clear across the room as some piano recordings are wont to do. Instead, the instrument sits comfortably before us as a real piano might, producing warm, calming music.