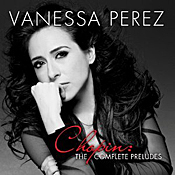 I was not familiar with Venezuelan-American pianist Vanessa Perez until I heard this Telarc recording of Chopin's complete Preludes. From these accounts, she certainly appears to be a pianist from whom we will be hearing much in the future.

Ms. Perez says, "The idea of recording all the Chopin Preludes came to me one night as I was playing them at home this past January. Chopin brings me back to my childhood [in Venezuela]. It connects me to every possible emotion, and to so many memories. It is music I have always loved, and that reminds me how truly blessed I am to be a pianist." Fair enough.

So, what are these Preludes of Polish pianist and composer Frederic Chopin (1810-1849), and why did he call them Preludes? "Preludes" to what? In musical terms, a prelude might be any of several things: It might be a piece that precedes a more important work or movement; it might be the overture to an opera; it might be a wholly independent piece, usually of modest length, used to introduce a fugue or a suite; or it might be any music that opens or introduces a church service. But in Chopin's case, I think his Preludes are simply short, self-contained little piano pieces that kind of resemble improvisations but are, of course, well constructed, if a little rambling. My Harvard Concise Dictionary of Music describes Chopin's Preludes as "pianistic character pieces...each usually based on a short figure or motif."

Well constructed, rambling, lacking or not lacking in formal thematic development, Chopin's twenty-four Preludes, Op. 28, which he completed in 1839, allow for a good deal of interpretation, which is why we have gotten so many different performances of them over the years from piano giants like Argerich, Arrau, Ashkenazy, Barenboim, de Larrocha, Eschenbach, Kissin, Perahia, Pollini (still my favorites), Rubinstein, and many others. From what I hear on the present disc, Ms. Perez can safely take her place among them.

Ms. Perez plays with a deft, gentle touch, capturing the subtle nuances of Chopin's music with care, feeling, respect, devotion, and love. I enjoyed the way she takes her time with the music, never hurrying it, never over dramatizing it, never over emphasizing anything unnecessarily but letting it speak for itself in smooth, delicate tones. While it may, perhaps, seem to miss some of the brawn and bravura of a few competing recordings, I've never thought of Chopin's music as anything but serene and contemplative, just as Ms. Perez presents it. It might also be easy for critics to characterize Ms. Perez's playing as somewhat sentimental, but I don't see it that way. It never sounds romanticized, just affectionately performed. 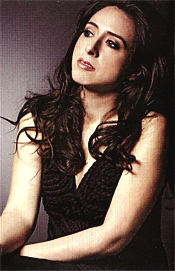 Even the quicker items, like the No. 3 Vivace in G major and the No. 11 Vivace in E major, sound poetically graceful in Ms. Perez's hands. Moreover, the most famous of the Preludes--No. 7, for instance, the little Andantino in A major, and No. 15, the popular Sostenuto in D-flat major "Raindrop"--get exquisite treatment.

Ms. Perez has the distinction, too, of making the twenty-four Preludes sound almost of a piece rather than a disparate group of separate items. Under her guidance, they ebb and flow as a unified whole, giving the illusion of a single continuous work.

Filling out the disc are four additional selections: the Prelude in C-sharp major, Op. 45; the Prelude No. 26 in A-flat major (posth.); the Barcarolle in F-sharp major, Op. 60; and the Fantasie in F minor, Op. 49. Needless to say, Ms. Perez applies the same careful, dexterous, illuminating style to them as she does to the Op. 28 Preludes.

Ms. Perez performed the works on a Hamburg Steinway CD147 piano, which Telarc recorded at Patrych Sound Studios, Bronx, New York, and released in 2012. The piano sounds beautifully balanced, not too close, not too distant, not too bright, not too soft. It projects a sweet, mellow, lightly resonant sound that nicely complements the meditative nature of the music.